Bo Burnham's 'Inside' is the special we needed 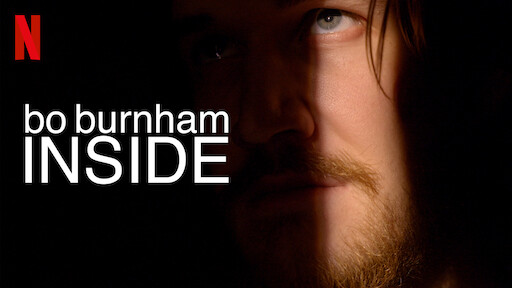 I'm a relatively new convert to TikTok, the app primarily used by those under the age of 30, and it was on there that I learned about a new comedy special from Bo Burnham on Netflix. People recorded themselves being excited to watch and then cut to being an absolute mess by the end of it. To say this piqued my interest is an understatement. Prior to watching this special, I didn't know that much about him. I was aware of him and what his schtick was, but definitely would not have considered myself a fan by any means. It's not that I didn't find his brand of comedy funny (musical/observational), I just never consumed his content. I have friends who have seen him live in person, back before his hiatus from live performances, and they really enjoy his work.
So one night after seeing multiple videos about it, I got comfortable on the couch and watched the whole thing on my phone. Since then I've watched it through 4 more times and listen to the songs on YouTube or Spotify daily. The songs are catchy and some of them are hilarious, while others just strike a chord like no other. "White Woman's Instagram" is a spot on observational song that really needs to be watched to get the full effect, as Burnham recreates scenes you might see on a white woman's Instagram page. This is type of song that Bo's fans will find very familiar. It's songs like this that are peppered throughout the special to bring some levity to the downward spiral both Burnham and the viewer go through as time passes.
"How the World Works" is presented like an educational kids song that comes with a mascot named Socko. It starts off like any other kids song, simple and upbeat before taking a dark but factual turn with lyrics like "The simple narrative taught in every history class is demonstrably false and pedagogically classist." Bo and Socko have an awkward interaction that resembles the conflict between those in power and the oppressed people in this country before ending on a "happy" note. This is one the more serious songs that shine light on the cultural happenings and issues going on right now.
"All Eyes On Me" is one of the last songs in the special and is the peak of the breakdown that Burnham is experiencing throughout this year long process. The entire special was written, performed, and filmed by Bo in a single room over the course of a year while quarantining. There are throughout moments throughout the the special when Bo speaks directly to the viewer about his mental health. It's during this song when I, and many others, really feel for him as you experience his (and maybe your own) depression, which is on full display. "WreckTok" has had an absolute field day using the lyrics from this song to make videos. If you're seeing a lot of those videos on your For You page, you've probably felt how Burnham's felt during the pandemic. It feels like a syringe of existential dread that's pushing you to embrace the depression and just give into those feelings.
This special is the perfect combination of high brow comedy, low hanging fruit, and insight into a mind that many of us can relate with. The last year and a half or so has been incredibly hard for almost all of us in one way or another. I was fortunate enough to stay employed full-time, physically healthy, and only had to deal with first-world inconveniences caused by the response to Covid-19. However, I found myself silently battling mental health problems like nearly everyone else and this special just hit me deep in my core. 'Inside' is an all encompassing work of art that shows the battle of trying to find humor in a world that's on fire. It's the special we needed but probably don't deserve.
comedy Health Life Social Media Television