March was certainly a chaotic month for us. Christine and the kids were home for the whole month because the schools closed and then moved to distance learning. Working for the Division of Public Health, I've been rather busy dealing with COVID-19 related matters on top of my normal work. Due to the madness, it was a really great month for one of these, okay for one, and a disaster for another.

1) Write at least 2 blog posts each month
My picture of the loaves of Banana Bread that I made blew up on Twitter.
Twenty One Pilots released an anthem for our quarantine.

2) Complete the 10 x 2 Board Game Challenge
I was kind of hoping that April was going to bring some extra game playing, but it was difficult with everyone home all of the time. For the second month out of the first four, we didn't play any of our challenge games. The only gaming I did was with the kids. They've really gotten into War and Go Fish lately. I was also able to play a few games of, Drop It, yesterday. With 8 months left in the year, we have to average 2 plays a month to hit our goal. Hopefully we can really get things going once the school year is over.

3) Bake at least 2 different baked goods each month
I didn't have a real plan for April and then there was a flour shortage, so it was a bit of a hodge podge. I started the month by making three loaves of Banana Bread: one plain, one with walnuts, and one with Reese's Peanut Butter Cups. They all turned out really good, especially the one with the Reese's in it. People online were quite enamored with that one. I still have three bags of frozen bananas, so you'll probably be seeing more banana bread in the near future. If you want to make your own, check out the recipe I use. 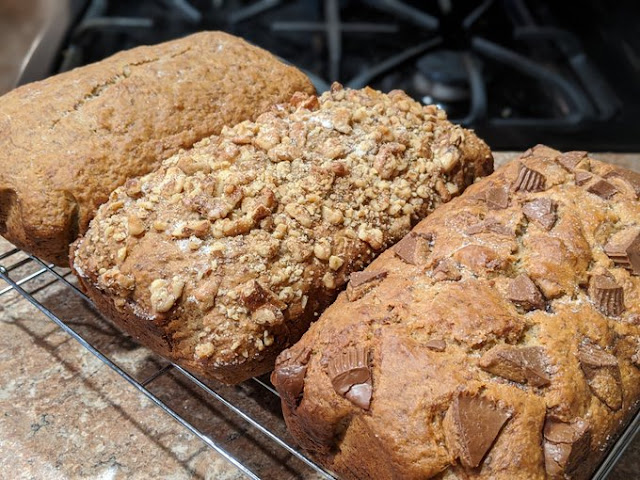 The first batch of sourdough discards in April went into pizza dough. After the initial rise, I cut the dough down into portions and put them in the fridge to ferment for almost a week. I made one pepperoni, one chicken spinach ricotta, and one cheese. For the two with sauce, I actually made my own using the recipe from Serious Eats. I cooked each one on the pizza stone and they came out great. The pepperoni pizza got the best color because I left it in there just a little bit longer than the other two. I think I'll probably do homemade pizza at least once a month for the rest of the year. I'd do it more often, but we normally order out to support local businesses.

Since we couldn't travel for Easter, I felt like making a more involved meal for that Sunday. We had a lemon garlic pork tenderloin, scalloped potatoes, and roasted asparagus with Parmesan. No holiday meal is complete without some dinner rolls. I made two pans of these sourdough dinner rolls and they came out great. They were really fluffy and soft. I brushed on some butter after they came out and then sprinkled them with salt. I think I ended up eating four of them that day. 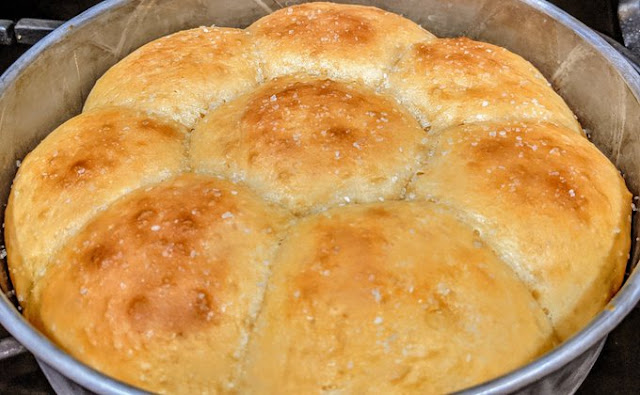 I ran out of bread flour early in the month (damn you, Covid-19). While I waited for my 50 lb. bag of hi-gluten flour to be delivered, I needed to keep making things that didn't require a higher gluten content. I had a hankering for biscuits and wanted to take another shot at using my sourdough discards in them. I used King Arthur Flour's Buttery Sourdough Biscuit recipe and they came out great. After they came out of the oven, I brushed them with a little more butter and sprinkled on some salt, just like I did the rolls above. My sourdough has developed a nice tang over these many months and it was great when combined with all of the butter. I'll definitely be making these more often on the weekends. 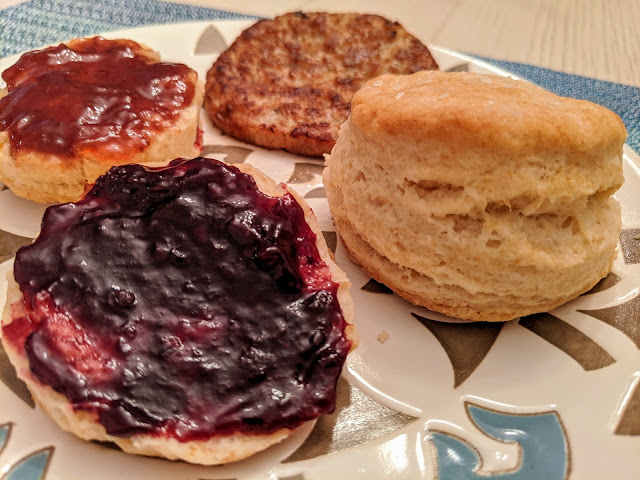 I ordered a 50 lb. bag of hi-gluten flour because bread flour has been impossible to find lately. My first use of it went into a large boule that I let proof in my new banneton basket. Cooking it directly on a preheated pizza stone and then adding some steam to the oven makes a huge difference. It came out really good, both in flavor and in texture. It also made some pretty good garlic bread to go with pasta we had that week for dinner. 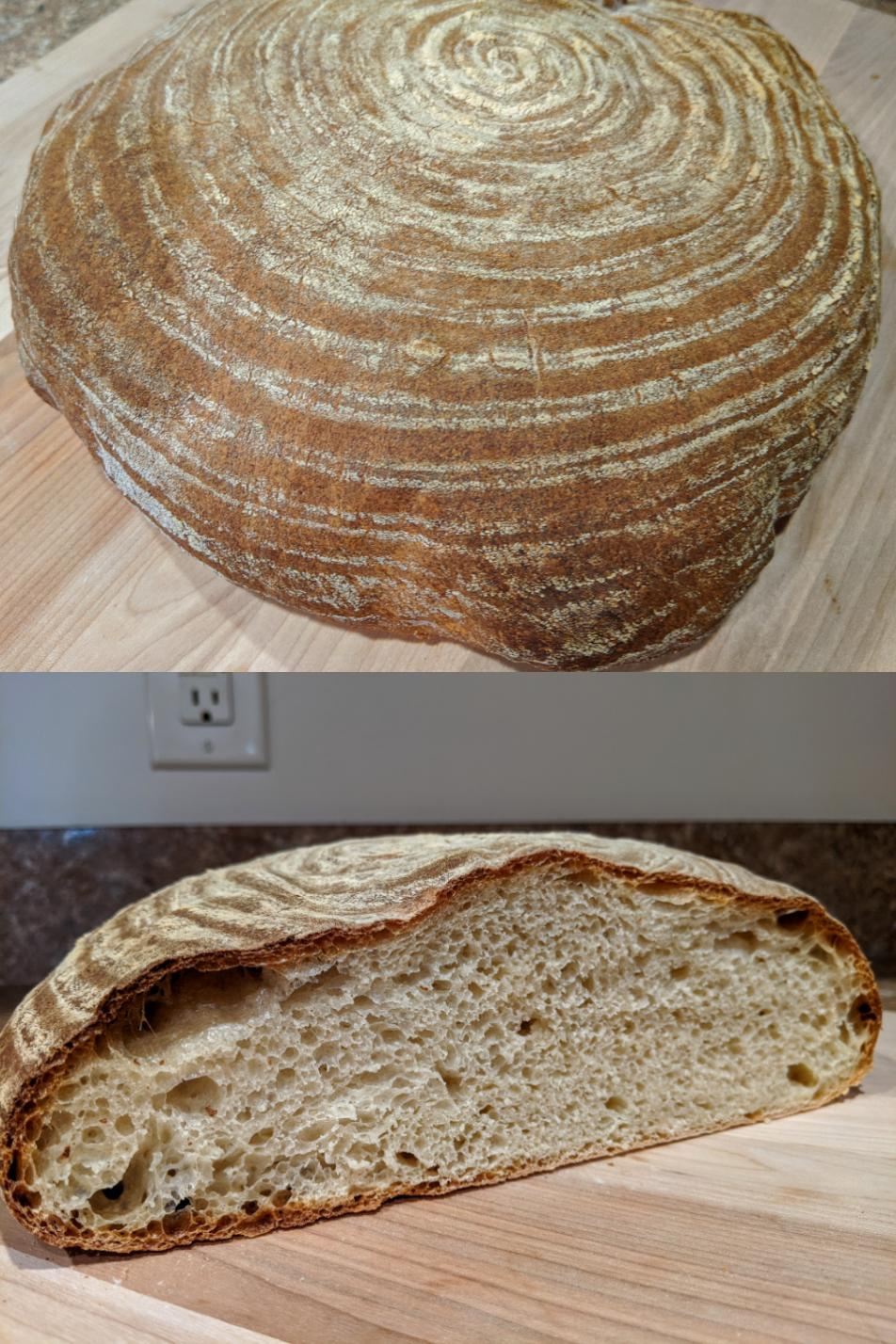 My second use of the hi-gluten flour got combined with fed sourdough discards to make pizza dough. After the initial rise, I split the dough into 4 pieces. Two went into containers in the fridge to ferment for a few days and the other two went directly into the freezer to use later. I was extremely happy with how the crust came out when these were done. It had a great chew and the flavor was probably the best I've made so far. I'm looking forward to many more pizzas using this combination. 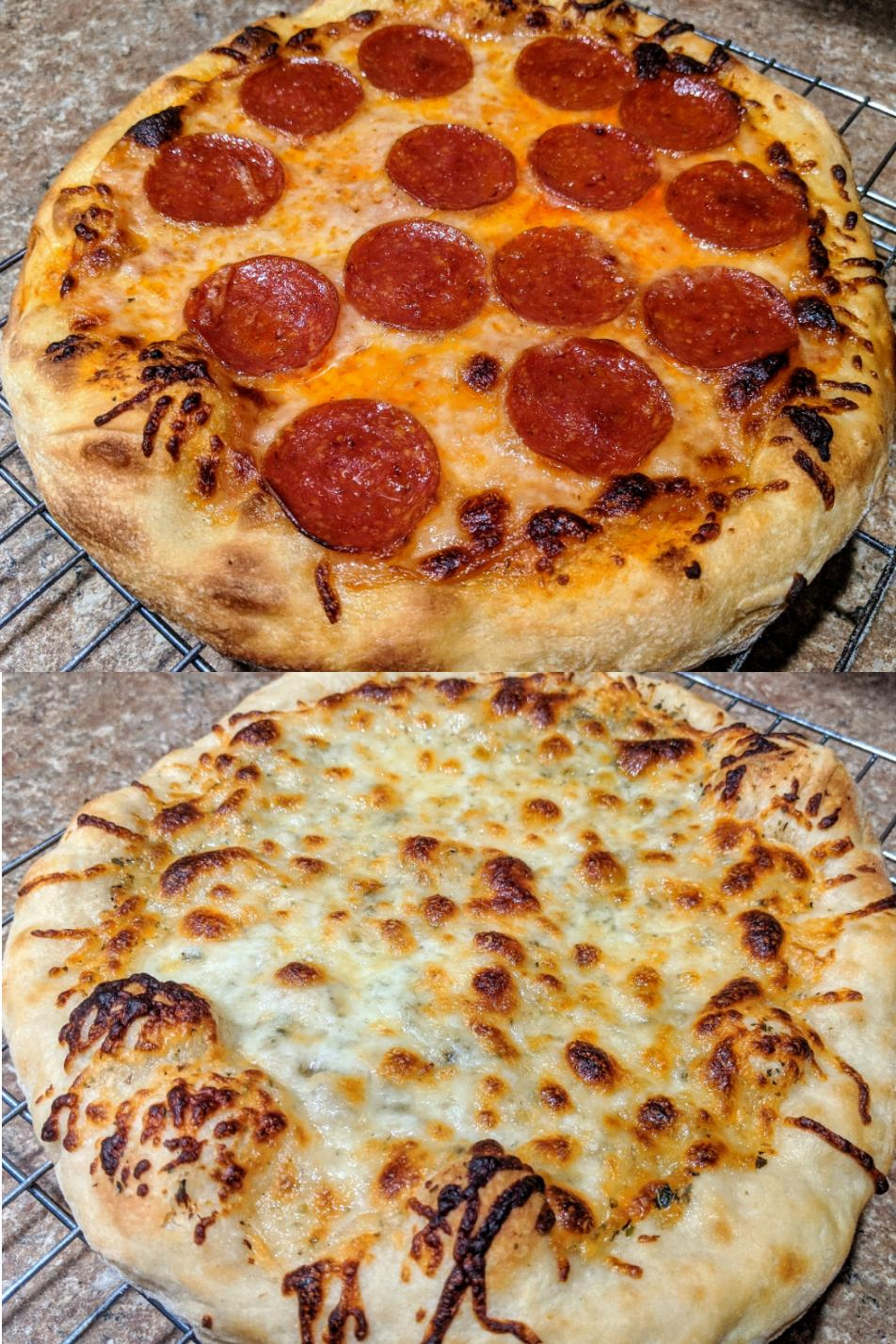 There was a post on Twitter for Alton Brown's Blueberry Buckle that sounded like a good thing to have for breakfast during the week. I didn't have cake flour, so I subbed a mixture of all purpose and cornstarch to lighten it up. I loved the crumb topping and will use that a lot more on other streusel topping desserts. The cake was pretty good, but I would like to try it with actual cake flour next time. The blueberries were kind of a let down unfortunately. They're not in season yet, so their flavor wasn't the best. I should have used frozen or just waited to make this until I could get fresh local berries. 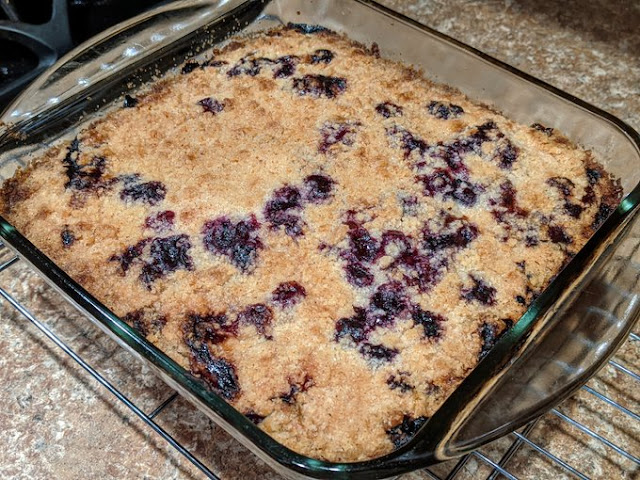