Only one month to go and I'm ready to declare that I succeeded on two of the three resolutions. I've been crushing the bread baking, doing way more than I expected to. I also have NO unplayed games! The meditation resolution was a bust this month, but that'll be my big focus for December and next year.

1) Bake more bread from scratch
I've been eyeballing a 100% whole wheat sandwich bread recipe for a while and finally decided to pull the trigger. Once again, I was using rapid rise yeast because I want to get through what I have. The first loaf came out okay. It sort of sunk instead of rising in the oven. It had a nice flavor and smelled really good, but the crumb was too dense and I only got through about a third of it before throwing the rest away. 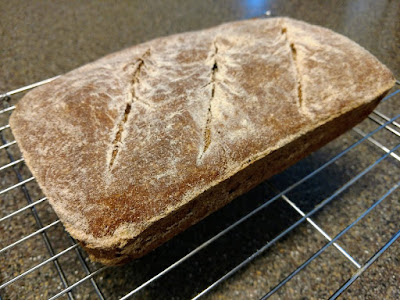 After a few days I made the rest of the dough into a second loaf. It ended up turning out worse. I was so frustrated that I chucked the whole thing before taking a picture. I don't know if it was the recipe, the yeast, or something I did, but I don't think I'll be using the rapid rise anymore. To rebound, I decided I would make more of the cheddar bread with regular active yeast. Of course that didn't come without any issues either. I accidentally left the dough out all night, opposed to putting it in the fridge. 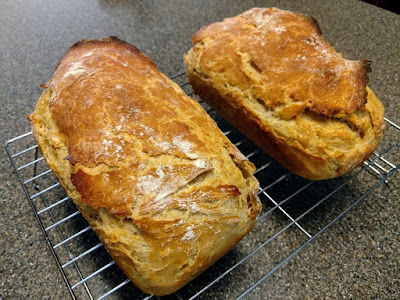 Thankfully, I made two loaves that came out just fine. We ate one loaf over a few days and froze the other for future eating. I doubled the amount of cheese in the recipe to 8oz and it definitely was an improvement. Christine thinks more cheese would be better and I have to agree. The next batch I do might have a whole pound in there. Maybe I'll mix in some other stuff in each loaf.

We traveled for Thanksgiving so I didn't bake any other bread. Since we'll be home all of December, expect a healthy amount of loaves next month.

SPQF
I was super excited to back yet another Grant Rodiek game. In typical Grant fashion, he takes a well know mechanic (in this case deckbuilding) and puts a twist on it. Most deck builders games have an economy built in where players use cards to buy other cards. In SPQF there is no buying cards, instead you take one card every turn from a central row or from one of the other players' rows. The rows in front of the other players are made up of whatever cards they didn't use on their previous turn. So that also creates this possibility to take cards from other players. Right from the get go, you have to accept that the cards in your deck aren't yours. 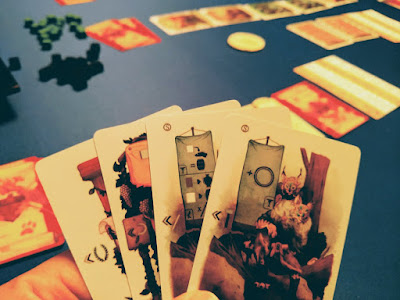 This game has a steep learning curve due to the number of icons you need to learn and the different strategies that can lead you to victory. You're constantly balancing increasing your civilization level, the number of cards going towards your monument, and the number of points you have. The rest of the group did not care for this game for a number of reasons. The graphic design was confusing to some, the rules were confusing to others, and the whole not being able to keep your cards was a turn off. I liked how the game worked and would like to play it more, but I don't know who is willing to go on that journey with me. I'm keeping it because I think it's interesting and needs to be explored more.

Asara
I traded for Asara because it's a Michael Kiesling and Wolfgang Kramer design. They've teamed up to design other favorites of mine like Tikal, Torres, and Coal Baron: The Great Card game. They both have solo designed or teamed up with other designers to do some great stuff. Asara is a light set collection game that had an interesting worker placement mechanic that uses a hand of cards. To place a work in an area to do that action, you must follow whatever color card had already been played there, if any, or use two cards of any colors face down. 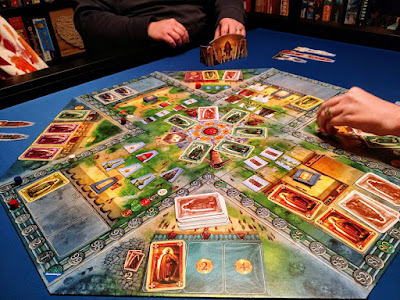 The object of the game is to build towers that all vary in worth depending on their color, the more expensive the color, the more points they're worth. Each round their is a small scoring phase and at the end of the fourth and final round, players score for tallest of each color and the most number of towers. Everyone seemed to enjoy the game and even though I thought I was doing rather well early on, I ended up in last after the final scoring. Since it plays quick, I can see this one hitting the table semi often so it's definitely a keeper.

3) Meditate on a regular basis
I really wanted to get focused on this one so I could go into the new year with a solid start. That didn't happen in November. There are a lot of reasons (excuses Dan, say excuses) why I didn't do better here. I did have some days where I had time to reflect but no serious sessions. Since I've declared the previous two resolutions a success, December IS going to be focused on this one. I'm upset with myself for failing on this once again, but I'm going to continue to keep trying. 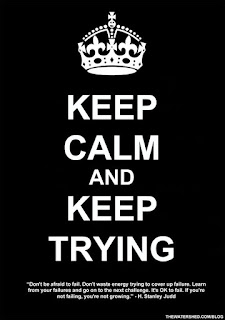 If you've been reading the blog or follow me on social media, you've seen my daily Bring Gratitude Challenge posts. I think those tie really well into this resolution. I've said in other blog posts and in these updates that next year is really going to me working on me, so expect a lot of posts about life, meditation, health, etc. going forward.