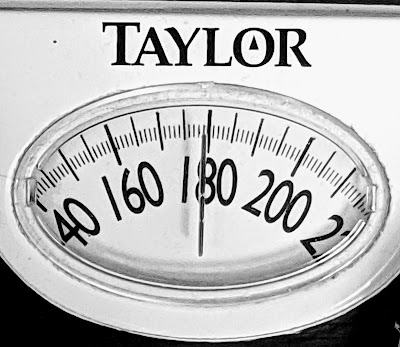 This past summer I was standing in front of the mirror in our bathroom and was not happy with what I saw. I knew I had put weight back on from the last time I lost a bunch. When I stepped on the scale, I was disgusted. Eighteen of the 32 or so pounds, that I had worked so hard on losing, were back. I made the decision that day to get back to tracking what I was eating. I knew that would help, but it wasn't until I got my Fitbit Flex 2 that I really got motivated. Since July 15th, the day I got the Fitbit, I've lost 35 pounds to get down below to my initial goal weight of 180.

I probably would have reached my goal a few weeks ago, but between BurrEato and Thanksgiving, November is a big eating month for me. I still tracked my calories and only went over 2 days for the whole month, because sometimes you just have to treat yourself. The key to my success has really come from the Fitbit, or rather, being more active because of it. I had a streak of over two months where I didn't miss a single step count of at least 10k daily steps. One doesn't need a Fitbit to be more active. However, between the reminder vibration to get up each hour and the tracking app, it's been worth the money.

When people around the office or others notice the weight loss, they often ask what I've done to get where I am. The answer I give seems to disappoint, like they were expecting for me to share some amazing secret. When it comes to weight loss, for me, being more active through steps or basic exercises and tracking calories is it. If it was anything more than that or I had to cut things completely out of my diet, I wouldn't be successful or even motivated to try.

Unlike the last time I lost this kind of weight, I can't just "try to be good" and hope the weight doesn't come back. I have to be diligent and keep pushing myself to stay on it. Otherwise, my weight is going to be a lifelong struggle. If I make better health choices in my day to day life, making them part of my routine, then it doesn't have to be a struggle. Would I like to eat a 3000 calorie meal from a restaurant? Absolutely. Will I? No. I may order said meal, but you had better believe I won't finish it in one sitting.

It's the going forward from here that I have to figure out. You may have noticed that I referred to 180 as my initial goal weight. I have no plans for stopping to lose weight right now. Do I look "good"? Yes, I do look good...comparatively to what I looked like before. If I were to take my shirt off in front of you, you'd still see plenty of fat around my mid section. Most, if not all, of that must go for me to consider trying to just maintain.

Once I find a happy weight, I plan to buy some new clothes. The ones I have now do not flatter my relatively thinner frame. My pants are all too big and are currently being held up by a belt that needs a couple holes punched in it to do its job properly. Some of my button down shirts make me look bigger, as they billow around me as I move. I don't want to get anything yet because if I lose another 10 or 15 pounds, then the new stuff won't fit. As much as I don't really like buying new clothes, I am excited at the thought of possibly trying out a "uniform" style. I wrote about doing that back in May of 2017.

Well, I think I've rambled on long enough. I needed to write something to share because when I saw the line on the scale stop where it did this morning, it totally made my day. I haven't been able to stop smiling about it since. Thanks for reading.
Health Life Minimalist Weight