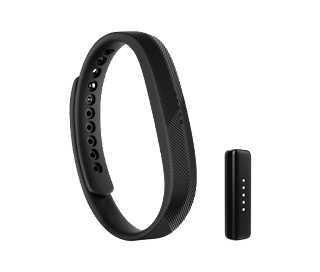 About a month ago, during Prime Day, there were a lot of sales on various activity trackers. I had some birthday money still sitting in my Amazon account, so I used that towards getting the budget friendly Fitbit Flex 2. It doesn't have all the bells and whistles that some of the more expensive models have, but I wanted to see if it's something I would actually use before spending more on one. Now that I've had it for a month, I thought I'd give my thoughts on it.

This purchase was inspired by my attempt to get back on track. Since I've gotten serious about getting in better shape and trying to lose some weight, I'm down 8 pounds in approximately two months. I've lost 6 of the 8 pounds in the last month. I attribute a lot of that to the Fitbit. The reason for that is because of the app that tracks a bunch of things and the ability to set reminders. I have it set so if I haven't taken 250 steps in an hour, from the hours of 6am to 3pm, the band will vibrate to remind me ten minutes before the hour ends. It gets me up and moving instead of just sitting at my deck. If that's all this thing did, it would be well worth the money.

There are a lot goals you can set in the app for the Flex 2 (more in the models that have a heart rate monitor) and being able to set them gives you something to work towards. It's like a game where you're trying to continually beat your high score. I'm walking more, drinking more water, and getting more sleep. I actually get disappointed in myself when I don't hit certain goals each day. I purposely set many of them higher than I'm likely to achieve, in an effort to push myself to get healthier.

One of the other reasons why I selected the Flex 2 over some of the other models is the way it looks. I don't like watches and many activity trackers are as wide or wider than a standard watch. The Flex 2 looks more like a LiveStrong or any other wristband. Now that I've had it and seen the options that people with other models have, I may upgrade to one with a heart monitor in the future. For now, I am more than happy with what I have. Maybe if I'm still using it religiously a year from now, I'll consider spending more on an upgraded option.

Overall, I think having an activity band is a good investment if you're the type of person who likes to see numbers turn into results. Having the band on is a reminder and motivator for me to be more active and eat better. Some people may not need that, but I've found that I do. I'd love to hear about other peoples' experiences with Fitbits or other activity bands, so please leave a comment. I'm going to wrap this thing up now because my Flex 2 just alerted me that I haven't reached my step count for the hour. Thanks for reading.
Health Life Weight