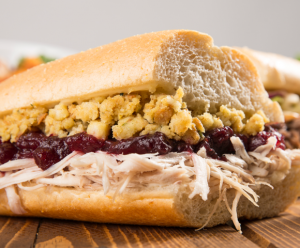 When I saw an advertisement for a $4 Bobbie sandwich from Cappriotti's, as a part of their birthday celebration, I decided I would buy one for lunch and do a review.  Some of you may be familiar with a sandwich review blog that I used to run called Syracuse Sandwich. The goal of the blog was to eat all the sandwiches in Syracuse and review them. Unfortunately, I was able to do 66 reviews before we moved to Delaware. I want to bring that back.

Now that I've got that out of the way, let's talk about The Bobbie. It's essentially a Thanksgiving leftovers sandwich, one of my absolute favorite types. The sandwich has in-house roasted turkey, stuffing, mayo, and cranberry sauce. I've had this sandwich a couple times in the past but haven't been overly impressed. It was very likely that I would never buy one again, but for just $4 (50% off) it was worth giving it another shot.

When you promote a sandwich as being voted as the greatest sandwich in America*, you had better bring it. Unfortunately that did not happen, once again. The seven inch sub roll was pretty standard but falls behind those of other chains like Jersey Mike's and Primo Hoagies. While I appreciate the shredded turkey, opposed to sliced deli meat, it was quite dry. To combat that, there is mayo and cranberry sauce. They did help but there wasn't enough of them combined to make up for just how dry the turkey was. It was the first time that the cranberry sauce wasn't cloyingly sweet so that's something. The stuffing tasted fine but it's very similar to cold Stove Top.

My biggest problem with the sandwich is how one dimensional it is from a texture standpoint, every part of it is soft. If the roll had some crunch to it or the stuffing was toasted on the flat top, that would drastically improve things. Without those it's just bite after bite of mush. It's really disappointing because I would love to get my leftover Thanksgiving sandwich fix on a regular basis without having to make it myself.

*That award came from AOL’s Lemondrop.com “National Sandwich Day” poll in 2009, so take that for what it's worth.