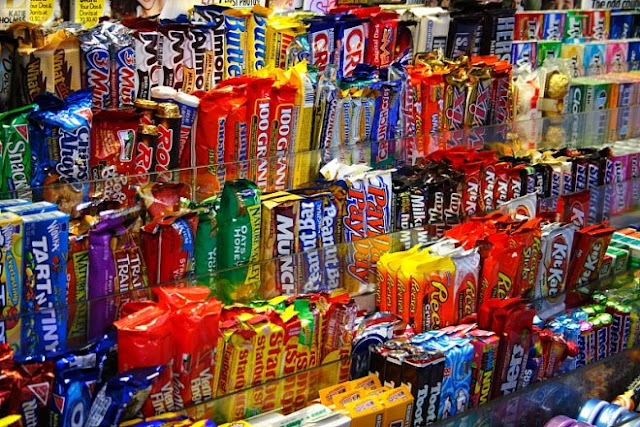 I love candy, especially those that are chocolate based. I try not too eat too much of it but there seems to be some floating around the house, year round. I was going to wait until Halloween to post this list but I'm not a fan of the shrinking size of candy that's given out during that night. I don't want a little bite of these candies, I want the full size bar/bag.  Making a top 10 list was pretty easy, but there were a few types of candy that I enjoy that didn't quite make it including: Butterfinger, Twix, Hershey Bar w/Almonds, and Skittles.

As you'll see from the following selections on this list, I'm a big fan of candy that either has peanuts or peanut butter in them. Pay Day's are a go to candy bar when you want something sweet and really salty. The solid log of caramel doesn't do a lot for me but when combined with salty peanuts, there is a texture difference that's rather satisfying.

3 Musketeers are almost like a diet candy bar to me, even though they're still full of sugar. They are lower on the fat scale but it's the airiness from the whipped filling that allows you to eat one and not feel like a complete fatty...at least I don't. 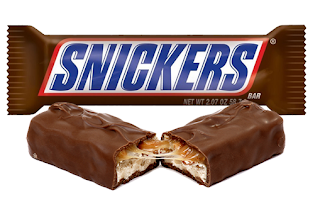 Snickers is an absolute classic and should probably be higher on this list. Their marketing campaign has worked well on me because if I need a little something to curb my hunger in between meals, I'll definitely grab one at the checkout. Chocolate, nuts, caramel, and nougat, hard to go wrong there.

The only fruit flavored candy to make this list is Starburst. Sometimes I don't want chocolate but want that sugar. As I said before, Skittles were also considered but the softer chew of Starburst is preferable. There is a lot of debate when it comes to ranking which flavors are the best and for years have used that to my advantage. HOT TAKE: I think the red ones are the best, but most people think they're the worst so I gladly accept them. 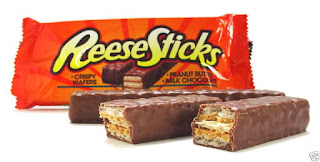 The hardest decision on this list was between Reese's Sticks and the next selection Kit Kat. They're so similar and while I love peanut butter, I just couldn't pull the trigger. For a long time I thought most of the Reese's spin offs were lame. None of them are as good as the original cup (SPOILERS) but the sticks are really good. 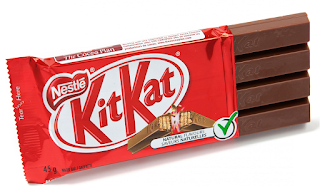 There is just something about a Kit Kat that I like a little bit more than a Reese's Stick. I think the lighter wafers and more solid chocolate that snaps makes them more appealing. I always feel like they go so quickly as I snap off piece after piece. Sometimes I like to be a monster and just take a bite from a whole bar. Do that while other people are half watching and they won't be able to not say something. Maybe the ability to troll others is why I picked Kit Kat over Reese's Sticks...maybe. 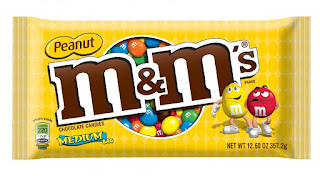 I do not like regular M&Ms. I'll eat them but they're one of the worst versions they make, just above white chocolate and caramel. Peanut M&Ms however are wonderful. What propelled them towards the top of this list is my ability to keep eating handful after handful of them. If a food makes me consciously stop eating it before I eat double digit servings in one sitting, you know it's good. I used to be all about peanut butter M&Ms (they're still great) but the peanut ones seem more adult to me and that's what I am...an adult...who needs to write a list about his favorite candy. 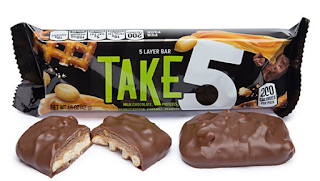 The Take 5 is the dark horse of this list. Many people I know don't know what these are but the ones that do know that they're a hidden gem in the candy world. They used to be packaged in red and yellow which I think got lost in the shuffle of other bars but now they went with a very distinctive black and bright green wrapper. A Take 5 is not for those who like simple flavors and textures because it's made up of peanut butter, pretzels, caramel, peanuts, and chocolate. It's salty and sweet with lots of crunch. It almost stole the number one spot because of it's complexity. But sometimes you have to keep it simple, stupid. 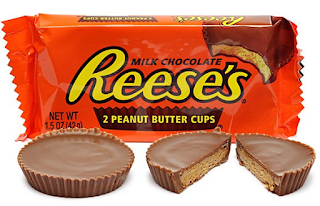 The classic candy that combines just two ingredients, chocolate and peanut butter, the Reese's Peanut Butter Cup is far and away my favorite candy. I've loved them since I was a small child and now our daughter, Grace, is following in my footsteps. I was actually a little ticked off when we found out she loved them because that means I have to share (where's my pity party?!). There have been many spin offs in the Reese's brand but the simple combo provides the perfect amount of sweet and salty. It melts better than any other and works well as an add in for many desserts. It's one of the only candy items I tend to keep in the pantry at all times, so it's there when I need my fix. I mean...I can stop whenever I want...I just don't want to.