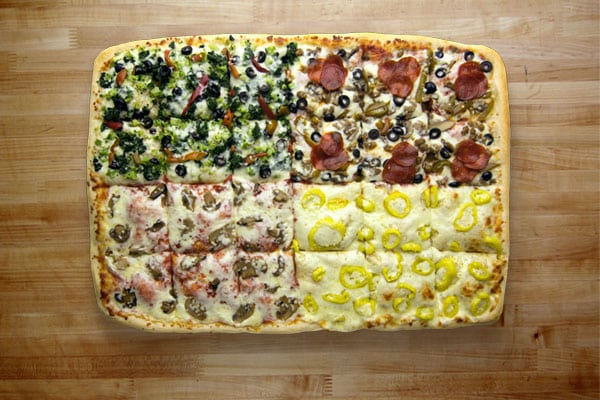 I have a lot of food opinions and I also happen to love top 10 lists. More often than not I scoff at the choices on those lists but they are fun to read all the same. So I plan on doing a series of top 10 lists that are all about what *I* like. You likely won't agree with my choices as the definitive best in a category but since it's all about my taste, you don't have to.

The first food that came to mind was pizza. There were a bunch of different ways I could go with it but I narrowed it down to strictly toppings. I was going to do a top 10 best pizza toppings but didn't see as interesting as it will be with other topics. The top 10 worst was very hard to come up with because I like almost all foods. So I put up a few choices on Twitter and the Top 10 Favorite Unusual Toppings was the winner. So without further ado: 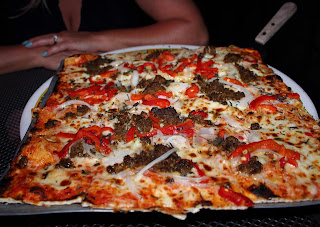 Before seeing Breaking Benjamin in Baltimore a couple of years ago, Christine and I ate a Joe Squared and had a really odd pie that had crushed tomato, oregano, meatballs, onion, roasted red peppers, parmigiano, romano, asiago, mozzarella, and….spaghetti. It’s a spaghetti and meatball pizza that comes in a square shape on a thin and crispy crust. When we saw it on the menu, being the carboholics that we are, we knew we had to check it out. The spaghetti got a little crispy but still had some nice chew to it. I was surprised that it didn’t burn and get really hard. In terms of flavor, it didn’t add much. I'd definitely want to try spaghetti or some other pasta on a pizza again, so much so that it deserves a spot on this list. 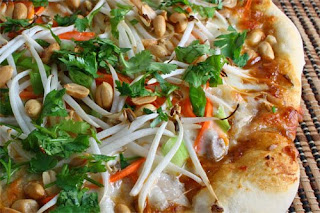 Finding a pizza with carrots on it is quite rare and almost always they're on one that’s Thai inspired. When combined with peanuts, chicken, bean sprouts, and a peanut sauce, they really shine. They add sweetness and crunch but won’t take over a pizza that has other assertive flavors. When adding carrots to a pizza, it’s best to have soaked them in water before hand or they will burn and become bitter. 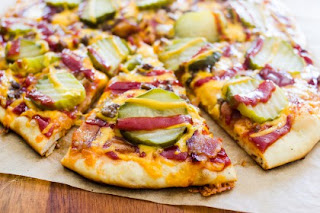 I've only had pickles on a pizza just one time but I enjoyed them enough for them to make the list. I’m not sure if they’d work in many other ways but on a cheeseburger pizza, their acidity did a great job of cutting through the greasy fat that beef and cheese present. I’m a big fan of vinegar flavors so I’m not shocked that I enjoyed them on a pizza. Thinking about it now, they might work well as a substitute for another pizza combo I really enjoy, bacon and banana peppers. Since banana peppers are typically eaten after being pickled, pickles should work nicely. Something to try this week I think. 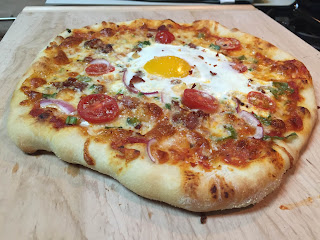 Egg on pizza isn’t unusual, breakfast pizza anyone? Even fried egg isn’t that unusual but I don’t know many who have tried it. Getting a raw egg to cook on top of a pizza takes some very high heat so that the egg white will cook through before the cheese starts to burn. Sure you could add one that's already been cooked on after but that’s cheating. Getting a perfectly cooked egg on a pizza is a thing of beauty. Once you cut into a properly cooked egg, the yolk will run over the pizza; adding a ton of fatty flavor. Pizza hack: let some of that yolk drip on the plate so you can later dip your crust in it. 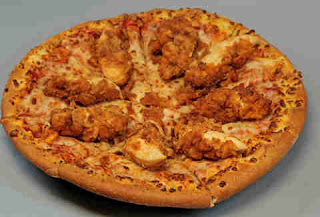 Chicken as a topping is available at almost any pizza place, even the large franchises, but fried chicken is a rarity. I’ve had this out and made it myself with leftovers from a previous night’s dinner. It’s certainly not a very healthy addition to a food that’s already loaded with calories and fat, but that doesn’t take away from how tasty it can be. The key to making it working well on pizza is adding it when it’s cold so buy the time the pizza cooks through, the chicken has warmed up and the breading has become really crispy again. 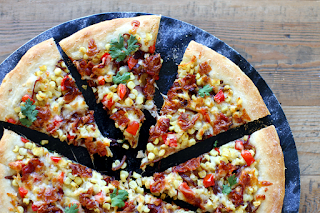 Whole kernel corn is GREAT on pizza. It seems really weird but the people of Japan have embraced it so you should too. Like many of the other ingredients on this list corn adds sweetness, and if cooked a little under done before being added, texture. I’ve found it mostly on Tex-Mex inspired pizzas alongside beans, black olives, tomatoes, and a “fiesta blend” of cheeses. It’s almost like a quesadilla but instead of a tortilla, you use pizza dough. I really want to try it on a less busy pizza, perhaps a white pizza with just zucchini and cheese. 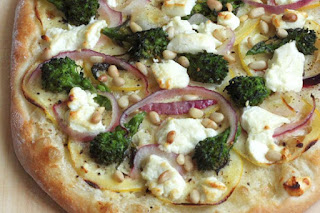 Both peanuts and pine nuts are great additions to pizzas that are designed from other dishes. As mentioned with carrots, peanuts go really well in a Thai inspired pizza. They reinforce the peanut taste from the peanut sauce while also adding crunch and some more salty flavor. Roasted pine nuts also add crunch and saltiness but go work the best on any pizza that uses pesto sauce since they’re already ground up in there. Adding them on top of a pesto based pizza just elevates that flavor. 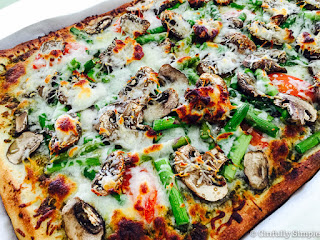 The first time I had Asparagus on a pizza was at Dogfish Head in Rehoboth Beach, Delaware, during our honeymoon; sadly it’s no longer on the menu. Asparagus works like any other green vegetable on a pizza, it adds freshness but will also take center stage no matter what other ingredients are included. If kept somewhat crunchy, it will provide texture along with a buttery sweetness. When Asparagus isn’t in season, broccoli is my go to choice for a green vegetable on pizza or any other dish. 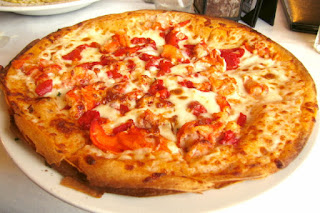 Lobster, shrimp, and crab are all great on pizza. I had a hard time deciding which one(s) to include so they're getting grouped together for this list and because of that, they almost take the top spot. I’m a huge seafood fan and these three shellfish are by far my favorite types. Each of them bring different textures but all tend to have a sweetness about them that goes well with the salty fats from the cheese. My biggest problem with ordering a pizza with shellfish is that it’s quite rare to get one where they aren’t overcooked. The reason for that is because like almost all other proteins, they have to be put on already cooked before going into the over. Shellfish cooks extremely quickly so the added heat dries them out. Putting them directly on the sauce and then covering them with cheese is a good way to prevent that. If done right, it's so good. 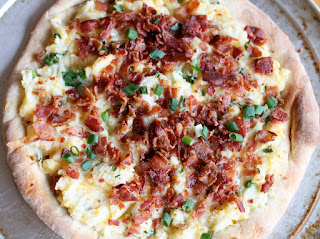 Potato is number one on the list because it is one of my favorite pizza toppings in general. It may not be THAT unusual but it earns the spot on the list because, like the fried egg, many people I’ve talked to have not tried a pie with it on there. I’ve seen all sorts of preparations from French fries to mashed potatoes to sliced potatoes. Loaded baked potato pizza is the most common style offered and that normally comes with potato, bacon, onion, and some variety of cheese. The best iteration I’ve found is from Sardo’s in Cicero, NY. They follow the toppings but start it off with a sour cream base instead of any sort of sauce. Potatoes offer both a crispy and creamy texture, if cooked properly beforehand, that is hard to beat. They also hold up incredibly well to prolonged heat in a pizza oven, unlike most of the rest of the ingredients on this list.