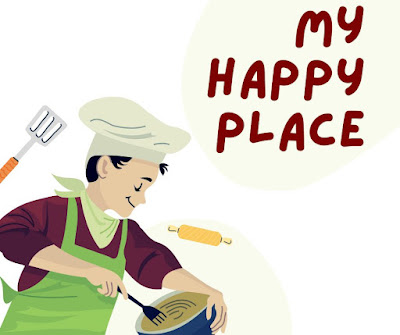 The beach, a quiet nook of a bookstore, snuggled up in bed, fishing on the water; the list of peoples' happy places is infinite. It doesn't necessarily have to be a specific place or activity, it could even be a memory or an imaginary space one makes up. You can even have multiple happy places, anything that helps you recharge or reconnect with yourself. Finding and spending time in your happy place lowers stress levels and boosts our sense of well-being. Sometimes it can do the complete opposite, if things don't go as expected, but in general it's something you should search out if you don't already know what works for you.

I've always known that the kitchen is where I'm at my happiest. I'm in there everyday preparing food at least once a day, but that doesn't mean I'm in my happy place daily. Sometimes it's really stressful because I'm normally making two, three, or even five different plates of food and timing them all can be difficult. Other times I've messed something up or a recipe just isn't coming together. Then there are times when everything is going fine, but there's a lot of noise from the kids playing and/or fighting. However, every once in a while, I can get into a groove and feel perfectly content. This happened yesterday afternoon and I'm still buzzing from it.

I remember the exact moment that I was cognizant that I was in my happy place. There was a large pot of My Mother's Tomato Sauce on the stove, I had just taken out a loaf of sourdough bread from the oven, and I had music playing through my wireless headphones. I sang and bopped along to each song as I minced up the sausage from the sauce and weighed out the dry pasta before it went into the boiling water. I stood there a while, leaning against the counter, rolling two pieces of rigatoni between my fingers. I was in a complete state of mindfulness that felt almost Zen-like. Of course the feeling came to end shortly after, but recognizing in real time just how happy I was was kind of intoxicating.

I could see myself trying to chase that feeling or force it to happen more often. There's no guarantee that it'll work if I do that, but there's also no hurt in trying. Finding healthy ways to get endorphins pumping is great for your physical and mental health. If you've read enough of my writing or have known me long enough, you know that I've been all about that for years now. I'd love to know what your happy place is, so please share in the comments below.