Time Creeps On (Or why I don't like my birthday) 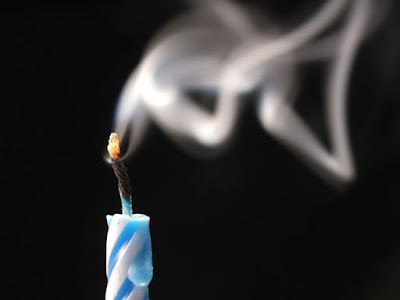 I'm 37 years old today. Birthdays at my age, at least for me, lost their luster a long time ago. I've never really cared for my birthday, for a multitude of reasons. As each year passes, that list gets longer and longer. The thought of getting older was appealing at one time, mostly when I wanted to be out of school and start living on my own. Oh how foolish I was to want to rush those years away. I mean it was inevitable that the time would come. I just wish that I had appreciated the time, before all of my current responsibilities, more. I'm sure everyone has a similar thought at one point or another. Our early and teenage years fly by so quickly and then we're adults that have to do all of the adulting things like get a job, pay taxes, deal with other people's bullshit, etc. It's the worst, but you already know that.

Year after year, especially after we started having kids, something always comes up on my birthday or the weekend I've had plans to do something. Usually it's other kids' birthday parties and I'm always going to put our kids first and let them go have the experience of attending those parties with their friends. I still have fond memories of birthday parties of mine and others from when I was young and denying that from our kids doesn't seem cool or fair. Other years, somebody hasn't felt well or we were traveling to NY for Easter. Because I haven't really liked my birthday, none of these things have been that much of an issue. The only time I really got upset was 4 years ago for my 33rd birthday.

After years of not wanting to celebrate my birthday, I was looking forward to having a day for me on the birthday that was also my favorite number. Hockey fans out there are familiar with the Montreal Canadian/Colorado Avalanche goalie, Patrick Roy, whose number was 33. He was my favorite player and I've liked that number since I was in middle school. It's a stupid, arbitrary number to celebrate but I had built up that day as something I was really looking forward to. I had plans to have all of my favorite foods that day and play board games with Christine and our friends. Days before, Grace got a birthday invitation from her best friend at the time that has a birthday in March but wasn't celebrating until my birthday. In the end, I ended up just moving some of the stuff to the next day but it wasn't the same or how I had envisioned it. It was icing on the proverbial cake and really sealed my dislike for my birthday.

When my birthday rolls around each year, I appreciate the well wishes and cards from family and friends. I don't need any gifts, cake, or to do anything "exciting". Would I like those things? I guess (well I never want the cake because I'd rather have pie but you get the point). It's always nice to get the acknowledgement and it does mean a lot to hear from people, even if they're only doing it because Facebook reminded them. I just can't get excited for it anymore because if I try to plan something, it'll likely get interfered with in some way and I'm tired of being disappointed. Not that I was looking forward to this birthday, but I'm glad I didn't make plans because the kids have Spanish Immersion night for the parents tonight. On top of that, the kids are each dealing with a various allergy related sickness, which may cancel our weekend plans.

I don't know if there will ever be a birthday I look forward to again. Maybe this is just another instance of me being miserable. Or perhaps I share a feeling that many others have as they get older. It's just another day of the year, why does it have to be special?