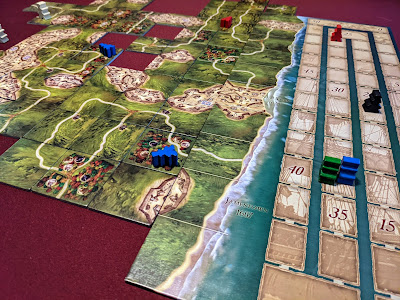 Another Carcassonne game I got in the same trade as the last one was New World: A Carcassonne Game. Like many of the games in the line, player take turns placing a single tile to an ever changing landscape, building towns, roads, and other parts of a countryside. After placing the tile, the player can choose to put one of their meeples on that tile as they try to score the most points by game's end. When a road or town is completed, the player with the most meeples on that scoring section gets the points. If two players tie for the most, both players get the points. The game ends when all of the tiles have been place. Sounds like every other Carcassonne game right? Well...yeah, but then there are some twists.
The big twist in this game is that players start on the east coast and have to build going west. In the original and most others, players build from a single tile in the middle of the table. With this, there are 8 tiles connected to the score board that players have to start building from. Once tiles start getting added, players can build from those tiles as well, as long as it's a legal play according to the placement rules. The other twist is a pair of surveyor meeples that drive exploration westward. Whenever a feature is scored, one of the explorer meeples gets moved. As the both move towards the west, meeples in unfinished features get returned to players' supplies for no points.
That second twist can make the game even more cut throat than the original and most of the other versions. Having to build towards the west constantly while also paying attention to where the surveyors are and if they may move adds a level of anxiety to the game. I think it would be even more prevalent if players didn't feel handcuffed as the game goes on. In our game, we ended up building along just a few tiles down the middle as people scored a lot towards the end. This drastically reduced the choices for scoring. While I liked the idea of building west and possibly using the surveyors to screw over my opponents, it didn't work out that well in practice. I like the game but it wasn't adored as much as vanilla Carc, so I've put this on the trade pile.
Review Tabletop