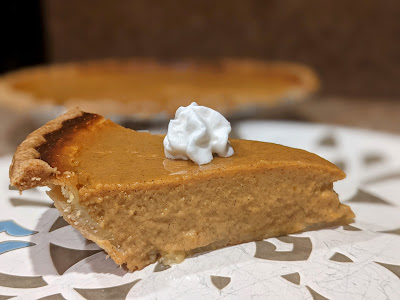 I was saving this for Thanksgiving time but then remembered we'll be up in NY and I was running out of time to make a pie for September. This is my 11th pie of the year as I move even closer to my goal of 12 pies made in 2021. It has less ingredients, as far as spices go, than most of the pumpkin pies I've made before, but it did have change that I really liked. Before mixing the filling ingredients, the pumpkin gets cooked over direct heat for 10 minutes to slightly dry it out and caramelize it. I've never seen this in a recipe before and I think it just enhances the flavor of the pumpkin a bit more.

I opted to use a premade crust for this because I didn't really have the time during the week to make one. I was disappointed that the bottom crust didn't cook very much at all by the time the filling was near set. The recipe specifically said to not blind bake unless it was being cooked in glass, this was cooked in a metal pan so it should have been an issue. The side and top crust still cooked through and had a really nice brown color to them. The filling was really smooth and didn't crack on top, giving me the nicest looking pumpkin pie I've ever made. Thankfully the filling and parts of cooked crust tasted very good, so I was able to salvage it by just not eating the raw bottom crust. In the future I'll definitely cook the pumpkin again and just do a par-bake on the cruse to ensure the bottom fully cooks. I could always just use my homemade recipe and have it not be an issue at all.