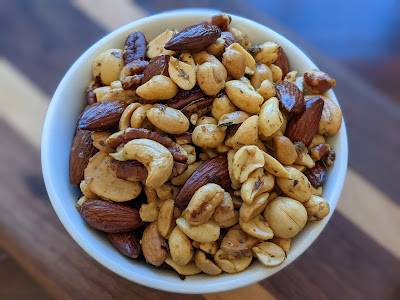 I've been holding on to this recipe for a while because I planned to make it for Christmas when we have guests. Then I thought maybe I should try making a small batch to see if we liked it. Using half a can of mixed nuts, I quartered the recipe to see if this would be something people would enjoy. It's an incredibly easy recipe that only requires the nuts to be toasted in the over for 10 minutes and then tossed in a mixture of spices and melted butter. They're served warm and tasted like they would go really well with drinks, hence the name. I don't drink but I think even a dark cola would taste even better while snacking on these.
The recipe calls for 1/4 pound of 7 different kinds of nuts or 1 3/4 pounds of unsalted assorted nuts. After those come out of the oven, they get tossed with rosemary, cayenne pepper, dark brown sugar, salt, and butter. I think the rosemary was a little strong and would have liked a little more cayenne personally. The nice thing is that you can play with the spices and measurements. I don't think I'll make these exactly as written, but will try to find some mixture that would be enjoyable to have sitting out as a snack before the main courses during the holiday season.
books cookbook Food Resolution