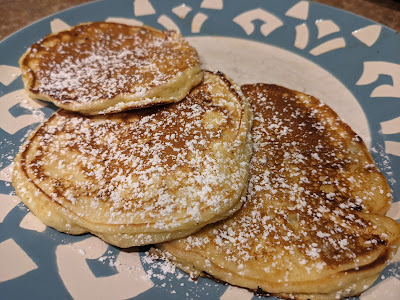 I've been very hesitant to try these pancakes since I got the cookbook. I'm not a currant fan and the thought of cottage cheese and sour cream as the base sounded very strange. Instead of currants the recipe says you can substitute raisins, so I figured Craisins would work just as well. I did decide to make a few pancakes plain just in case. The rest of the recipe has the standard ingredients of eggs, sugar, vanilla, flour, baking soda, and salt. Some lemon zest and nutmeg are added for some extra flavor. The batter looks similar to any other once all of that gets mixed into the cottage cheese and sour cream. Thinking about it now it should be surprising because those two types of dairy just replace milk in a standard recipe.

There isn't a whole lot to say about these other than they came out like pancakes. They were definitely much lighter and not nearly as dense as a recipe that has a lot more flour. The sour cream did give them an interesting tang that made them a little more savory than pure sweet. I don't think they needed the Craisins and putting currants or raisins wouldn't have been any better. Blueberries or strawberries would have been great, but they were perfectly tasty plain with some powdered sugar, butter, and maple syrup. I will definitely make these again in the future as a change of pace or when I have extra cottage cheese that needs to be used up.