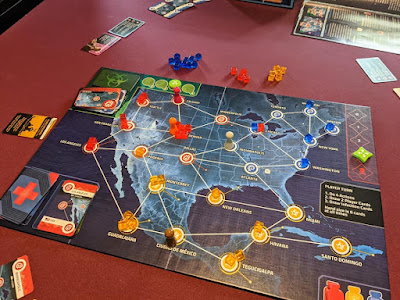 The Pandemic series is far and away the most popular set of cooperative games in the tabletop gaming. Since the original came out in 2008, 12 different versions of the game with various themes and styles of play. Pandemic: Hot Zone - North America is a stripped down version of the original that focuses solely on North America instead of the whole world. It's marketed as a shorter, more portable version that plays in roughly 30 minutes. This is accomplished by reducing the size of the map, number of diseases that need to be cured, and having a much smaller deck of cards.
It normally retails for $20, but was able to pick this up for only $7 on Amazon. It's hard to pass on almost any new game for that price, but it's a no brainer when one comes from a well respected series. As promised, the game plays pretty quickly but I think it's over way too fast. You don't really get time to take in what's happening, as you jump right into damage control. From a thematic stance it's great but there isn't enough time to enjoy what you're accomplishing. From the reviews, it seems like the game is either really close and you only lose by a turn or you completely dominate even on the hardest setting.
Having played many cooperative games as a group, we opted for the most difficult level. It includes some extra cards that restrict actions that we can take. We came close to the win and would have one over the next two players' turns because we had the cards needed, but just came up short after a chain reaction created the last outbreak allowed before losing. It's a decent distilled version of the original, but I didn't like it enough to keep it. Not being a fan of most cooperative games means the group has to love it in order to justify the shelf space.
Review Tabletop