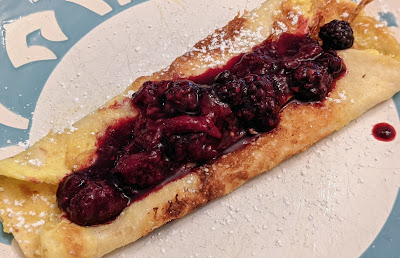 I'm fairly confident that I've never made crepes before, but I've definitely had them on a number of occasions. From what I understand, they're not particularly hard to make, they just take some practice like anything else. Similar to a pancake, they start with a batter that's just significantly thinner and really need to done with a crepe pan. This recipe however uses a sneaky cheat in the form of battering a thin tortilla with heavy cream, milk, and vanilla. After a quick browning in a pan containing melted butter, it gets folded and topped with whatever ingredients you'd like. It really couldn't be any easier and as the chef who came up with it says in the foreword, "Not one person has ever figured out that I wasn't making crepes in the traditional way."

I chose to follow the picture in the book and top ours with a berry compote and some powdered sugar. But you could add anything to these and they would be delicious. I think they did come out a little bit on the eggy side, but I'm using farm fresh eggs that aren't consistent in size. In the future I'll just use the smaller ones or add a little extra cream. I think some desert style ones with a cream cheese filling or savory ones with ham and cheese for lunch would be great. They come together in less than 5 minutes so it's not much effort for something that breaks us out of the same old things. This is going to be one of the recipes from the book that I'll continue to use for sure.