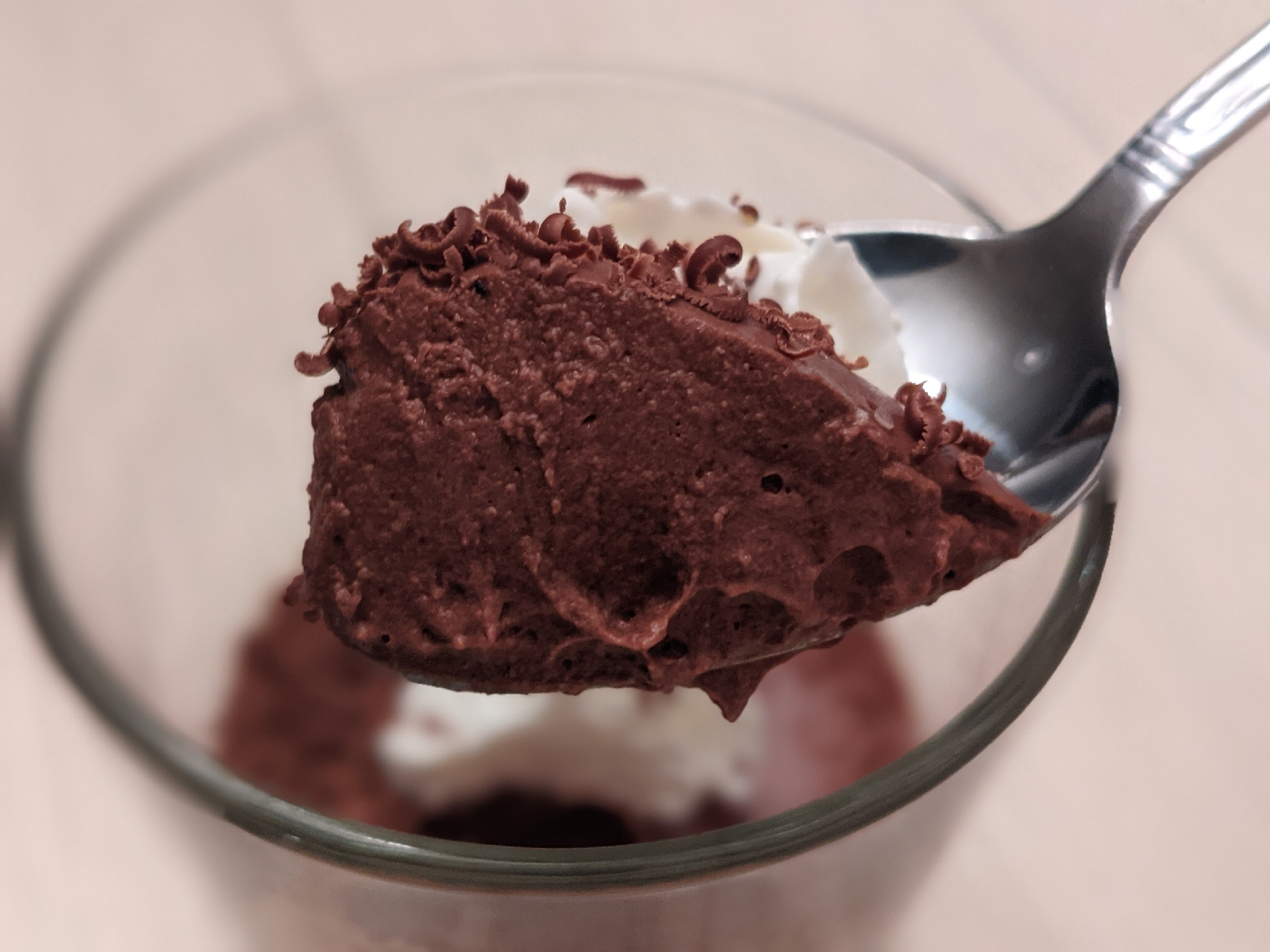 My only experience making mousse, before I made this recipe, was when Christine and I used the recipe from the back of a Swiss Miss Hot Cocoa Mix box. We hadn't been dating long at the time and decided to make a giant metal bowl's worth of what was very much not mousse. It was just cocoa mix that had been dissolved in water before folding in two containers of Cool Whip. It made so much and it wasn't even good! It was kind of grainy and had the hint of chocolate flavor, but was basically just flavored whipped topping. Traditional mousse uses egg yolks as a thickening agent and the whipped whites to give the mixture an airy lightness about it. However, even this recipe isn't traditional but it's miles ahead of the Swiss Miss Mousse and it's even vegan.

I hadn't set out looking for a vegan mousse, it just happens to be the recipe in the book. It's another one of the genius techniques and this one was invented by an actual genius. A French chemist figured out a way to mix chocolate and water in a way to make a mousse. This is something that normally would not work, because chocolate and water mix about as well as...well chocolate and water. Normally chocolate will seize and crumble when water comes in contact with it in a melted state. Keeping the chocolate moving is the key to stopping that from happening. You're essentially making an emulsion like a vinaigrette, as you whip the two ingredients together.

Once the chocolate has melted in a pan of warm water, the pan is put over a bowl full of ice cubes. Whisking continues to create air into the sauce, much like whipped egg whites would, which steadily thickens the sauce. When strands of chocolate start to form inside the loops of the whisk, it's ready to be portioned into ramekins, small bowls, or glasses. They took about a half hour to set to my liking in the fridge. I topped mine with some whipped cream and chocolate shavings from the remaining dark chocolate I was working with.

Christine and I both agreed that it was a tad on the bitter side because it was so rich. Having the whipped cream on top helped balance it out a bit, but the consistency was nice. I think I'll make this with a slightly lower percentage of cocoa. This was made with 72% and maybe something like 68 or even 60 would be perfect. It's definitely something I make again, but not before I try my hand at the traditional way of making it first.