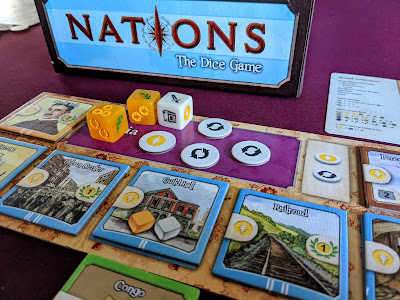 Part of my 2021 New Year's Goals trading, selling, or donating my board games to get them down to a more thoughtful and reasonable for me size. After acquiring and adoring FORT, I knew it was time to pass along it's predecessor, SPQF. Finding someone to trade it to, let alone buy it, now that the new version of it was out was a bit of a task. However, I was able to find a fellow fan of Grant's (the designer) that was interested. He didn't have anything on my wish list, but I went through his for trade list and came across Nations: The Dice Game. I've always wanted to play more civilization games, but they tend to be very long and complex. This is the complete opposite of that while also looking like it would give a similar feeling.

Nations: The Dice Game is the streamlined version of Nations that uses dice instead of cards. Not having played the latter I can't speak to how they compare, but I heard good things the reviews and playthrough videos. The object of the game is to build the best empire through a series of dice rolling and acquiring various tiles that bring upgrade dice, additional re-rolls, and/or extra food or military power. Over the series of four rounds, one to four players compete to earn the most victory points. The player with the most points at the end of the final round is the winner.

I played this at two and found it to be rather enjoyable, albeit, a tad on the simple side. I've played games with less complexity that offer a bit more in the way of meaningful decisions and interesting strategies. I think that comes from two different factors: a) every civilization starts with the same starting dice and abilities and b) that the randomness of the dice rolls can really handcuff your options. I think if each civilization came with different starting dice, that it would force players to play differently. I found out the expansion that came out for this does exactly that, so I'm thinking of picking that up.

One of my favorite things about the game was the ability to acquire additional upgraded dice while also possibly increasing the number of your turns in a given round. When you acquire tile, you have to cover one of your five space that comes with a basic die (or upgraded die if covering a previously acquired tile). You lose any dice that the covered space had them, but if you time it right, you get rid of a die you already used on a previous turn. Now you'll have those new dice to use on a future turn. Not only does it give you more options going forward, it also allows you to possibly claim first player by having the most military power at the end of the round. This coupled with the random placement cost for the tiles each round give the game a ton of replayability.

All in all I think it's a decent civilization game that needs a little extra to be a keeper. I do think I am going to pick up the expansion because it seems like it fixes the main issues while also adding some extra wrinkles. This all feels like a group friendly game for us because there is basically no player interaction outside of comparing military power for first player and competing for the lead on the Books track. If the expansion does what's expected, then I could see this sticking around for a long time.