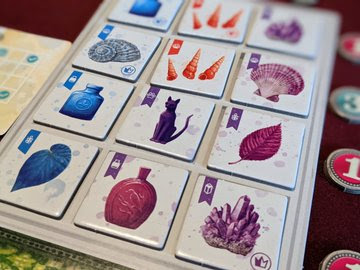 Steve Finn, designer of The Whatnot Cabinet and many other games, caught my attention many years ago with arguably his best design, Biblios. It's one of my favorite games that, if you read this blog, is always coming up in my top games posts. Ever since, I've kept an eye out for whatever he's working on and have played quite a few of his published designs, from his own publishing house or others. The Whatnot Cabinet was Kickstarted by the latter, Pencil First Games. Over the past few years, Steve and Pencil First Games have published a handful of games together. When I saw this combo putting out a drafting and set collection design with an interesting action selection mechanic, it was an instant-back for me.
In The Whatnot Cabinet, players take turns drawing two tiles in various ways and add them to their player board a.k.a. Whatnot Cabinet. The object is to place various shapes and colors into the rows and columns to score the most amount of points. During setup there are 6 objective cards for the players to achieve, 5 of which are claimed by the first player to complete the task shown. The remaining card gives an additional point for every tile with that type in any player's Whatnot Cabinet. In order to get the tiles, players take turns selecting one of five action types that give more or less choices when selecting tiles. The more of an option a player might get, the further down in turn order they will be in the next round.
The game plays incredibly quick, as each player in a four player game only takes 6 total turns. The real puzzle and crux of the game comes in the tile placement. Players can score 4, 2, or 0 points for each of the three columns and 3, 1, or 0 points for each of the four rows. Placing the tiles to score the most possible points while also competing for the objective cards turns an incredibly simple game into a thinky one very quickly. It's not as brain burning or anxiety inducing as say, Calico, but it's still very enjoyable and more casual gamer friendly.
As a whole, I think the group liked this one more than other games I've brought to the table recently. Beth Sobel's art is really nice to look at, it doesn't overstay it's welcome when it comes to play time, and it's fairly simple to teach. If you want a light game to play over a meal or between a couple of heavier games, I would say The Whatnot Cabinet it perfect. As I said before, it's casual gamer friendly and could even be played by elementary school kids with little or no help. I don't think it packs the same punch as some other tile laying games out there, but it's not meant to either. For my ever shrinking collection, it's going to have a hard time sticking around but I'll be happy to play it anytime for as long as I do have it.
Review Tabletop