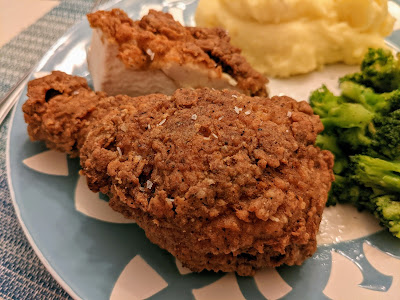 Fried chicken is one of those things that I've never really made at home. I don't tend to do much deep frying, especially since getting the air fryer, because it can be messy and frankly isn't that good for you. That's not to say that I don't love fried chicken, I just let the professionals with commercial deep fryers make it for me. This recipe was an absolute labor of love that required an overnight brine and a day uncovered in the fridge. Instead of buying 8 thighs and 8 wings as in the recipe, I just bought a whole chicken and broke it down into 8 pieces, since there was only going to be two of us eating it.
Before I go any further into the preparation, it's story time. As I said this required an overnight brine and I had everything I needed except rosemary. Since it is in the name of the recipe, it's definitely required. I bought enough to make the brine and went through the motions of making it. The recipe says you can use an ice bath in the sink to cool it down quicker, this is something I do before portioning out tomato sauce. So I put the pot in the sink full of ice water and go to break down the chicken. With the chicken broken down, I need to wash my hands. You can probably see where this is going. Yep, I put soap on my hands and absent mindedly washed them directly over the brine. I realize it almost immediately, but the damage is done.

How could I have done this? Well there are almost always dishes in the sink during the weekend as I'm making various things and the brine is essentially just a pot of water with stuff in it. Because my brain didn't see a pot of red sauce screaming STOP, I didn't even notice. So now I had a broken down chicken and no brine. I was so upset. I didn't have anymore rosemary and the thought of going to the store again was not something I could handle at that moment. I was for sure I didn't even have any dried rosemary in the pantry because I almost never use it. I hemmed and hawed for about 10 minutes about what to do. In a sheer bit of luck, past Dan HAD purchased dried rosemary. So in the end I just used that and made a second batch of brine.

From there, the chicken sat in the brine overnight, got dried off, and then spent the next day air drying in the fridge. That night, each piece was dredged in seasoned flour, then a buttermilk mixture, and then back into more seasoned flour before going into the hot oil. Let me tell you, this was delicious and well worth the time to make it. That doesn't mean I'll be making it often, but a once or twice a year dinner for sure. We were able to get dinner and a few lunches out of one whole chicken and it tasted great cold. If I have any critique, it would be to reduce the amount of pepper or even add some additional spices to make the breading have an even more complex flavor. However, it was wonderful as is and I was happy to eat it despite the self inflicted brine disaster.