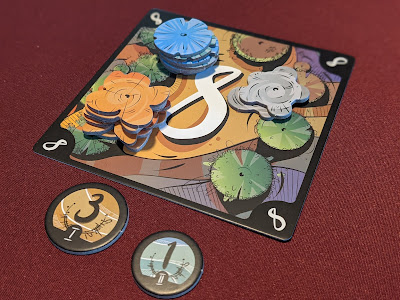 The final game in the small box set is the area-majority, dice rolling game Sequoia. In this game, players secretly roll 5 dice each, make two pairs and leave out one of the dice. All players reveal their pairs and assign one of their tree tokens to the value on each of their pairs. After all players have placed their 20 tree pieces across the 10 different spaces, each one is scored. The player with the most tree tokens on a space gets the first place points and the player with the second most gets the second place points. Any other players get no points. The player with the most points at the end of the game is the winner.
It's an incredibly quick and easy game that anyone can learn in less than a minute. On it's face, Sequoia seems like a luckfest with area control. However, there are a couple of things that really need to be considered when playing. The first is that the points for each of the 10 spaces are randomly assigned at the beginning of the game.  Players should maybe focus on lesser point values for first place because they can probably get them for less investment, maybe a token or two, instead of using 5, 6, or even more to get one of the higher first place values.
The second thing to be considered are the tie breaker rounds. After the initial scoring and removal of tiles of players not tied for first or second on a space, all players who are tied on a space roll their dice again and assign tree tokens to any space they are tied on if possible. This creates a lot of tention because with 5 dice, you must be able to roll some combination to be able to place one of your tree tokens right? Wrong. Some people may not like the luck involved here, but it's a light game that shouldn't be taken too seriously.
I like this game enough that I'll stick around for a while. It reminds me of a less mean Las Vegas, a dice game I absolutely adore. It seems like you get to make more decisions in Sequoia, where as in Las Vegas, the optimal decision is very apparent most of the time. I'll need more plays to Sequoia to determine if it's better though. I think the two are too similar to justify keeping both, especially because I have a lot of area majority games and my group doesn't love them as much as I do. I also think Mountain Goats is the best of the bunch and it has area control which is basically the same thing.
Review Tabletop