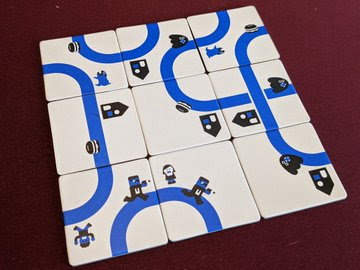 My group tends to like puzzly games, so I'm always on the lookout for something new that we'll enjoy. I've been seeing a lot of Nine Tiles Panic, and other Oink Games, on Twitter over the past year or so. The Japanese publisher has become very popular by releasing quirky, small boxes games. This is a real-time, pattern building and tile laying game, where players are trying to score points according to three objective cards that are drawn each round. When a player or players cross the scoring threshold to end the game, the player with the most point wins.

Each player gets a matching set of 9 double-sided tiles that show various roads and icons. All of the roads must lead out of a player's "town" in order to score any of the objective cards. The choice of what sides of the tiles to have face up could be most dogs, longest road, most burgers on a single road, etc. The player that does the best at each objective scores the most points and each player after them scores one less. So in a 4 player game, the first player would get 4 points, third place would get 3, and so on. The tie breaker is whoever finished their town first.

That's where the anxiety and stress of this game comes in. Because it's real-time, you're racing to build your town to get the most optimal tile placement, but once somebody claims the first player tile you only have 90 seconds to complete yours. If somebody was really quick, the round could be over in less than 2 minutes. Then you're left scrambling to just make your town work, while also trying to score, AND grabbing the lowest numbered player tile for tie breakers.

It's a real hoot if you don't mind real-time game play. I'm not usually a fan of it, except when it's a puzzle like design. Get Packing and Dimension are two other games that are both puzzle based and real-time that we really enjoy. This is just one of those small box games that's going to stick around for forever in my collection because you can play it with anyone. Now that I've tried my first Oink Games game, I'm interested in picking up some of their other titles.