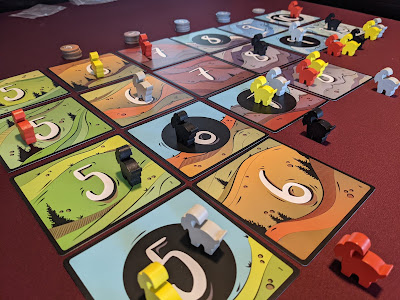 The second game from the Kickstarter I backed was Mountain Goats, a king of the hill, dice rolling game. Two to five players take a set of adorable goat meeples and put one at the bottom of each column. On a player's turn, they roll the four dice and then group the dice in any combination. It could be 4 separate dice, 2 paired with 2 separate, 3 together with separate, etc. Players move their goats up one space for every group that matches the number on that column. When a goat gets to the top of a column, they get a point token equal to the number of that row, if available. At the end of the game, the player with the most points wins.
What makes the game really interesting are the choices you're forced to make after your dice rolls. If another player is currently at the top of a column, it would behoove you to claim that spot and send their goat back to the bottom. However, if you were already at the top of a column and rolled that column's value, it's guaranteed points. Then there is the tricky bonus of getting at least one point token in each row to claim the highest valued bonus token. Of course you could also deny other players the ability to even get them if you can take most or all of a single value's tokens. So there are press your luck and take that elements also incorporated in a way.
I really love everything about this game. From the components, to the art, to the gameplay, it's a great little package. It sort of reminds me of one of my favorite games that I don't own, Can't Stop. Instead of getting points at the top of 10 different columns, you're racing other players to claim 3 of them by rolling that combination of dice without busting. I've played well over 300 games on Board Game Arena. Mountain goats creates some nice wrinkles by adding more meaningful decisions. It's a lock to stay on the shelves for a very long time.
Review Tabletop