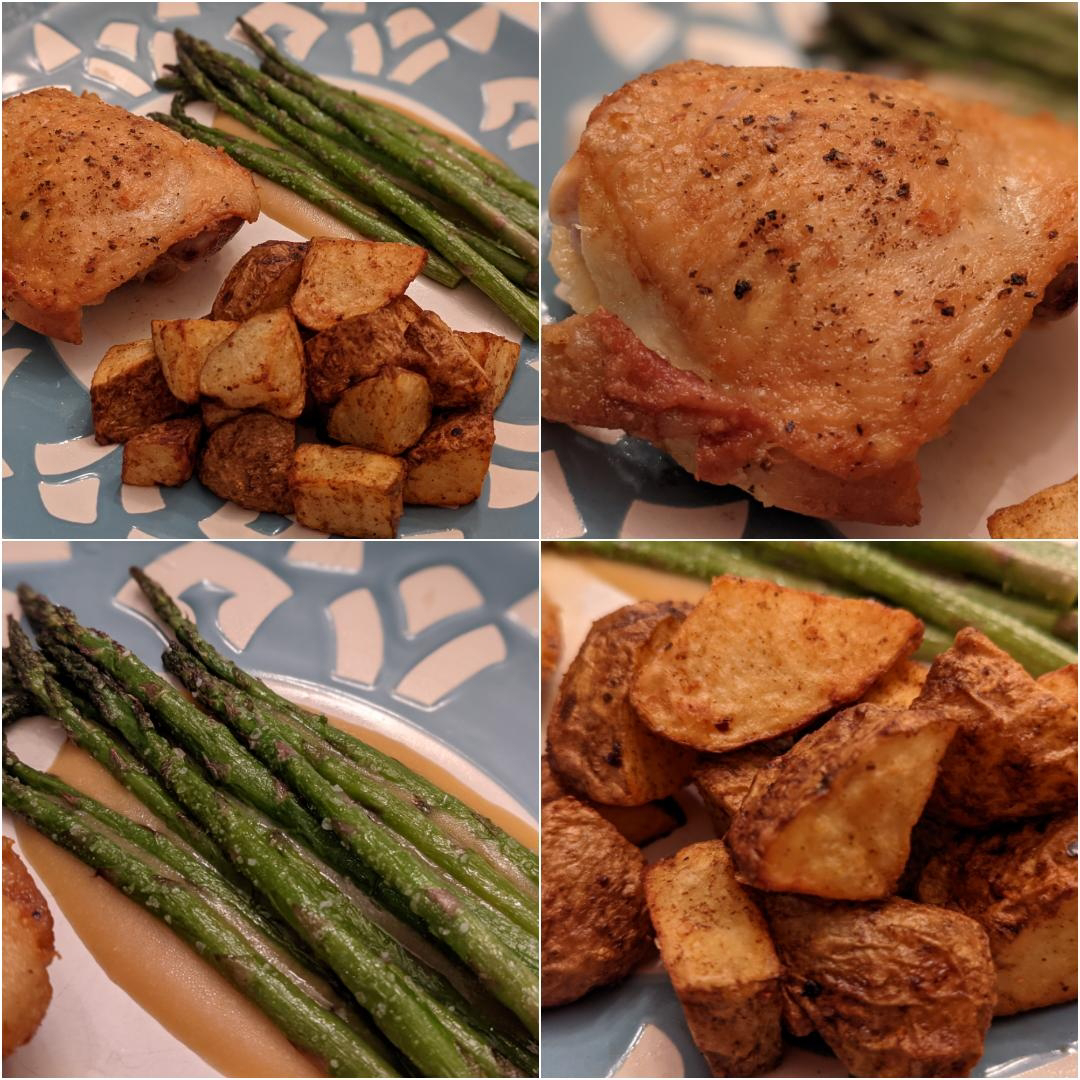 I wanted to make this chicken recipe as one of the first out of the cookbook. Little did I know, preserved lemon isn't an easily obtainable food product in my area. All I needed was half of the rind from a preserved lemon. No stores in our area sell the expensive ingredient (~$10 for a jar of 2-3 lemons), so I just made my own. The problem with doing that is that it takes about a month. It's very easy to do though and now I have a whole jar of them. It's just cut up lemons and a bunch of salt in a jar that you shake each day. Since it had been about a month, I bought the thighs and was ready to finally make this INCREDIBLY easy dish. It's another one of the "barely a recipe, more of a technique" recipes in the book.

There are only 3 ingredients outside of salt, pepper, and a tablespoon of olive oil. You heat the oil in a heavy skillet (I chose to use cast iron) and then add the salt and peppered thighs, skin side down, into the pan. The fat renders over the next 15 to 20 minutes and the skin gets a beautiful golden brown color. Once that has happened, you stir in the finely chopped preserved lemon rind and then flip the thighs over to finish cooking. When the meat closest to the bone is cooked, they're done and can be served with the pan drippings and some lemon wedges. It's super easy and during the time you're waiting for the chicken to cook let's you get your sides ready.

For a starch, I made air fryer roasted potatoes by cutting the up and tossing them with oil, salt, and burger seasoning. This is one of my go to sides for dinner and breakfast. There should always be a vegetable on the plate and that's where the fried asparagus with miso dressing comes in. The dressing comes together pretty quickly, but I had a hard time finding miso at our local stores. Thankfully, I found an Asian market right down the street from my work recently. I stopped on my lunch for the first time and was able to find miso and some other goodies that will appear on the blog at some point. Fresh asparagus gets cleaned, cut, and then quickly fried in oil for a couple of minutes until bright green and just tender. The asparagus goes over some dressing on the plate and normally topped with fried leeks, but that's something that keeps deceiving me around here so I just left it off.

In less than an hour, I ended up with one of one of the best plates of food that I've made in a while. The chicken was moist but had a very tasty, crispy skin. I wish I had added more lemon, but the few bits I got cut through the fattier thigh meat. The potatoes are always good and nearly impossible to screw up. The real star of the show was the asparagus and more specifically, the miso dressing. Fresh asparagus fried was better than steamed or even sauteed. It kept it's form a bit more and the thicker parts still had a little snap to them. But that miso dressing...it's sooooo good. I was mopping it up with leftover potatoes and refrigerated the rest because I couldn't let it go to waste. The dressing is sharp from the vinegar and garlic, but also creamy from the miso. I opted not to add the optional sugar syrup because I liked it as is.

I will definitely be making both of these dishes again. The chicken thighs couldn't have been easier and had much better flavor than a chicken breast. The recipe foreword suggests two other seasoning varieties that I might try. Frying asparagus in oil for just a couple of minutes will be my new go to, if I'm not roasting them in the oven instead. The miso dressing will be made many, many more times. I might stop at the store to buy salad stuff just so I can pour that wonderful dressing all over crisp, cold lettuce.