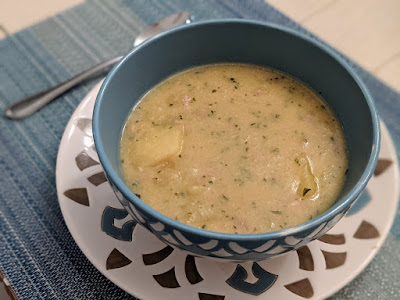 We're big fans of all things potato and during the winter I always make potato soup. My normal recipe is a cream based soup that gets blended to a smooth consistency and then topped with loaded baked potato type toppings (bacon, cheese, sour cream, etc.). This recipe specifically states that "if you wanted an unobstructed, smooth soup, this isn't it." I wasn't sure how it would go over, but I like a chunky soups so it would probably be fine. I was surprised to end up with a pretty creamy soup without having to add any dairy. That came down to the type of potatoes that get used, Yukon Gold, which aren't as hearty as a Russet variety and start to disintegrate in the stock over time. If the soup isn't as creamy as you want, the recipe calls to break up more of the potatoes with a wooden spoon. I'm not sure if you couldn't just use an immersion blender.

The soup has some complex flavors for not having a ton of ingredients. It did have some extra steps that I'm not used to having to do when making soup and some ingredients I don't always have on hand. Most soups follow the: cut up vegetables, meats, herbs, and drop them in the stock style. This recipe has you blanching almonds, frying them with garlic, and then blending them into a paste in a food processor. I don't know if you can buy pre-blanched whole almonds at the store, but I couldn't find any. So that meant I had to buy whole almonds and blanch them myself. It doesn't take very long, it's just tedious to peel each almond's skin off. Some of the paste after blending them gets set aside to be added at the end after mixing in vinegar.

Then there was saffron, an ingredient I have never had on hand. Saffron is the most expensive spice in the world, costing anywhere between $500 to $5000 per pound. That means a couple pinches in a bottle will cost you $15-$25 at the grocery store. I wasn't thrilled to spend that much on a spice I've never used, but I'm committed to make each recipe as written whenever possible. You steep a pinch of crushed saffron threads in a couple tablespoons of the broth before stirring that into the pot. It adds a nice yellow color and luxurious gloss to the soup. I don't know how necessary it is flavor-wise, but I'll definitely be looking up recipes to use the rest of it up.

A little bit of ham or prosciutto rounds out the soup, adding more savory flavor and helping with the gloss. I though it tasted pretty good, but Christine didn't love the almond flavor that reminded her of marzipan. I wonder what another nut, like walnut or cashew, would be like. The Yukon Gold potatoes were so soft and worked perfectly in this soup. I rarely buy them because they're not great for roasting or frying. All in all I think it's a good soup recipe, especially when you want something that's creamy without the calorie heavy dairy. That being said, I think some sort of cheese mixed into this soup at the table would be very tasty.