World War Z: An Oral History of the Zombie War 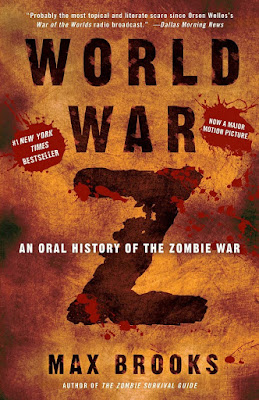 I saw the movie World War Z in theaters and thought it was entertaining, but generally a bad movie overall. It's like they were able to land Brad Pitt and just abandoned what could have been an amazing compilation of shorter stories all tied into one movie. That's to say, I enjoyed the book immensely and think it's superior to the movie in every way. There are definitely small parts of some of the stories that get worked into the movie. However, I would have rather seen the stories of the many characters you meet throughout.
This book is written in such a way that I've never encountered. Instead of it being from a protagonists point of view or that of a narrator's, it's a series of interviews. Sometimes there are a handful of questions being answered and other times a character just tells a story. It's a fascinating way to recount a fictional storyline. The interviewer travels all over the world to find out how various countries dealt with The Great Panic and the dead. Some reviews really disliked this way of writing, claiming there was no tension or character development. I wholeheartedly disagree and think they just expected a different kind of book.
Max Brooks, son of the great Mel Brooks, has written movies and other books like The Zombie Survival Guide. I read that a couple years after it came out, before The Walking Dead came on the scene. Now we wait to see if World War Z 2 ever gets made. It'll be interesting to see how they incorporate anymore of this book, that was a real delight to read.
books Resolution Review