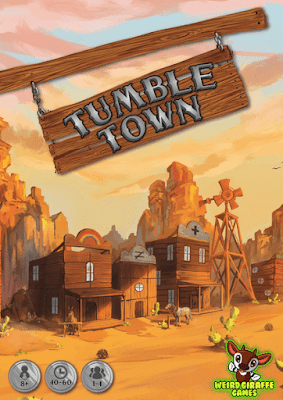 Tumble Town is another previously unplayed game that saw the table recently. I backed this on Kickstarter because I didn't have many dice heavy games and this looked like something our group would really enjoy. Another thing that drew me to the campaign was the designer, Kevin Russ. I had already backed, and was waiting for his other game, Calico, which looked fantastic. I figured that if Calico was as good as I assumed it would be (it's freaking amazing) then I would enjoy this design as well. Tumble Town is on the lighter side of things (game complexity weight of 2.0 out of 5 on BGG), but like Calico, it has much more depth than one might think at first glance. It plays 1 to 4 players in about 45 minutes and we found that timing to be about right for 4 players.

The theme of the game is building the best western town that you can. As the mayor, you decide what buildings will be added to your town's main street. On your turn, you select a building plan from one of three rows and then take a selection of dice shown on the first card in the that row. Those dice tumble down a cute little dice tower that comes with the game. Players take those dice and try to build the cards they select by matching the colors and necessary die faces, as shown on the buildings. When a building is complete, you add those dice to your main street card. Any left over dice go into your storehouse for future use. When two of the four piles of dice have two or less dice left, the end game is triggered. The player with the most points at the end of the game built the best town and is declared The Best in the West! 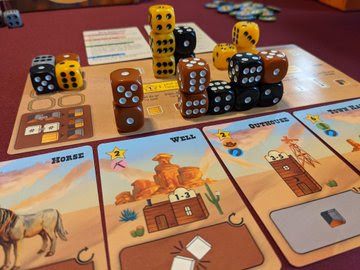 There is so much to love about this game. First, there is the spatial puzzle of building your town in a way that earns you the most points. Each space on your board has a rule to follow that will give you a point. If you're able to leave a single space between buildings, that gives you a point for creating an alleyway. Second, are all of the bonuses players can earn once they've completed a building. Some cards give you extra dice, some give end game scoring, and my favorites are the ones that let you manipulate your dice in some way. The last type are ongoing, so you can create an amazing engine that will make completing buildings much easier. Third, is the many ways to score. Not only do you get points for building on your board, you also get points just for completing the card. Each player has a secret objective symbol on the back of their Horse card that gives them points for each building they build with that symbol on it. Then there are those end game scoring cards that give you all sorts of different bonuses. Naturally those cards are the hardest to complete, but they are worth it.If you couldn't tell already, I REALLY enjoy this game. I'm very happy I took a chance backing two games from the same designer without having played either of them. I think Kevin Russ is certainly a designer to watch if he keeps up this level of quality game play. The upgraded components compared to where they were when the Kickstarter campaign started, really make playing this game a delight. The puzzly nature, ability to play solo, and overall just enjoyable experience is going to keep this on my shelves for a very long time.
Review Tabletop