It's A Wonderful World 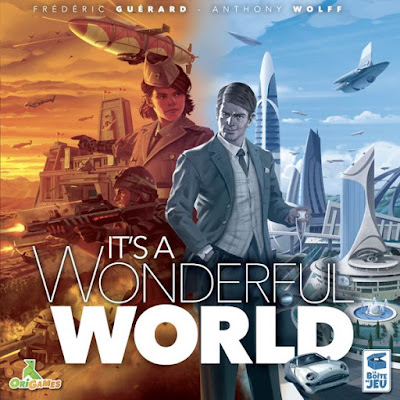 The last previously unplayed game that we played recently was It's A Wonderful World. I first learned about this game when somebody compared it to Res Arcana, a game I really like. They both feature drafting, hand management, variable player powers, and end game bonuses. They're both resource producing games but use those resources in different ways. Gamenight! on Board Game Geek did a play through of it, so I decided to check it out (Deborah Ann Woll being in the episode had nothing to with it, I swear). After watching it, I added it to my wish list and ended up receiving it for Christmas from my other sister-in-law and her husband.

The game plays 1 to 5 players and plays in 30 to 60 minutes. I think we were a little over 60 minutes in our initial play of it, but like many drafting games you'll get your time down significantly with multiple plays as you learn the cards. Each player takes a role of one of the five empires looking to expand their production power and rule over this new world. Over four rounds, players will draft cards, produce resources, and recycle or build cards that will turn into resources, bonuses, and/or points. The player who earns the most victory points is the winner. 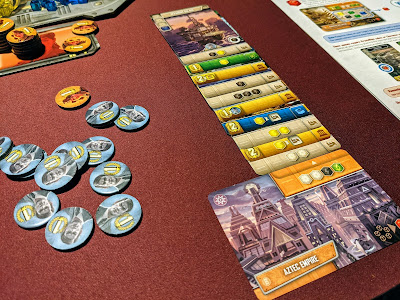 While writing this review, something that came up during our play just kept coming back to me. The graphic design seemed off and that's when I realized I made a major rules goof when teaching the game. Upon a subsequent play with two players, I realized that it didn't affect my overall enjoyment of the game. I think my biggest mistake was trying to teach three games I'd never played before, all in one gaming session. Lesson learned.

I adore this engine building game that is near mind melting for me. It seems simple enough to just draft some cards, turn some in for resources, and then use those along with what I produce already to build new cards. But mapping that out while also trying to earn cards that give bonuses and scoring opportunities pushes it beyond something like 7 Wonders. In that game you're drafting one card at a time with the resources that you already have or can buy from a neighbor. This is more open sandbox, where I can take whatever I want and then have to try and make it work. Not having as much direction or restriction usually isn't my thing, but I like the puzzle it creates by giving me so much freedom. Half of our group loved it and the other half really did not. Despite that, I'm keeping it to play a lot more until I get a real feel for it. I think either this or the aforementioned, Res Arcana, will be traded at some point. Who knows, maybe I'll just keep both because they're just great games.