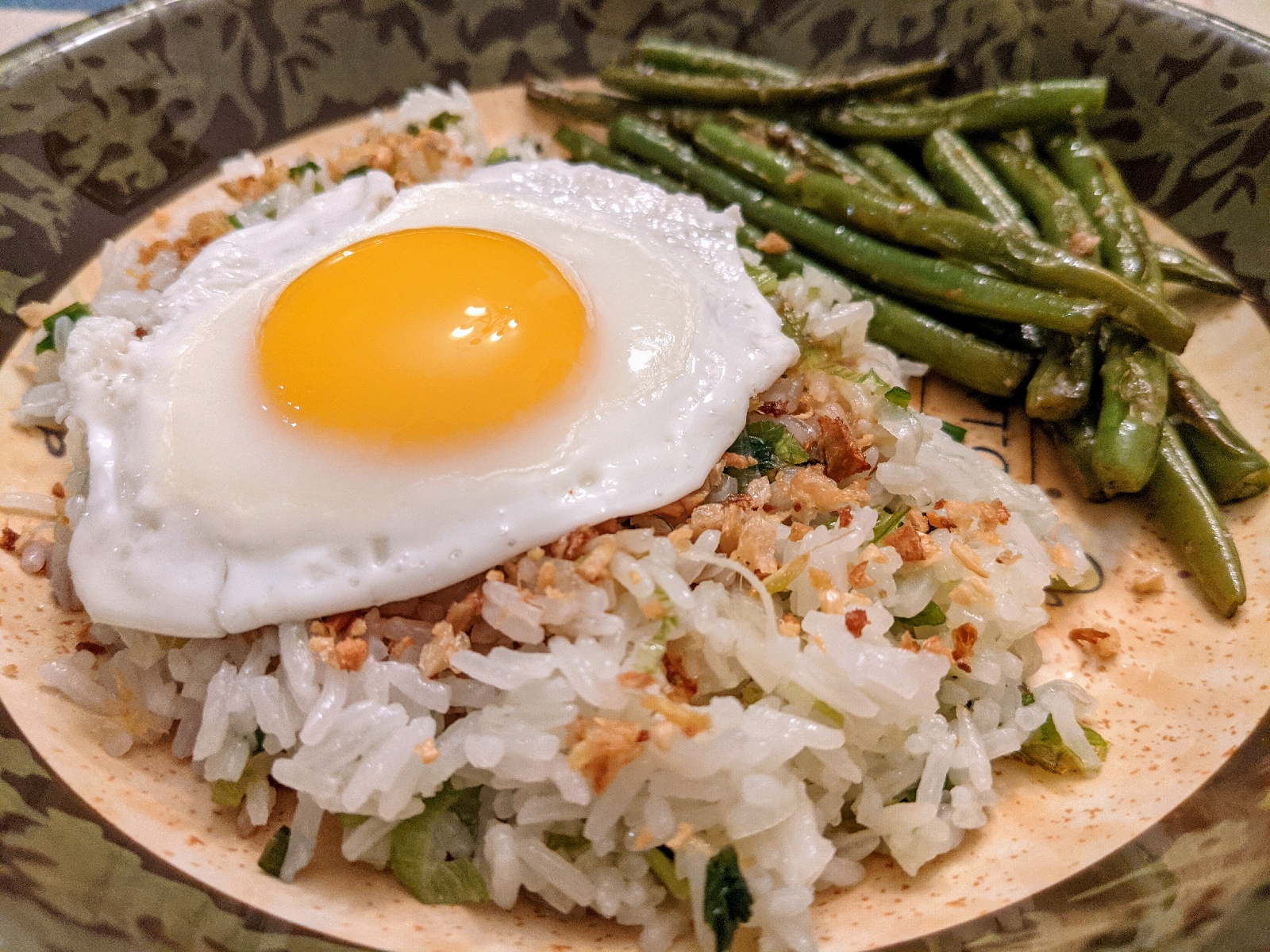 From time to time I may combine multiple recipes to create a whole meal and that's what I did for last night's dinner. Under the Meatless Mains section, I saw the recipe for Ginger Fried Rice and that seemed like a perfect thing to try as part of a vegetarian dinner. Then I added the Garlic Green Beans to round out the plate. I've been making fried rice for many years because I love Chinese food and it's pretty easy to make at home. Sometimes I use a packet of spices and other times I make it from scratch, like with this recipe. I'm pretty sure this was my first time every using fresh ginger before. From the many hours of food programming I've watched over the years, I knew to use a spoon to peel away its flaky skin. I minced that down with equal parts garlic and sautéed them until brown and crispy. Those bits get set aside, while keeping the now infused oil in the pan to cook everything else.
I was unable to find leeks anywhere, but instead used the thickest bunch of scallions I could find. This substitution has always worked well in the past, so I felt comfortable doing it here. After those were cooked, the rice just gets warmed up in the same pan. I cannot stress this next point enough when it comes to making fried rice...ALWAYS USE OLD RICE. The book says you can get away with fresh but I have never had any luck. I usually use day old rice, but making it in the morning, spreading it out on a sheet pan, and then sticking it in the fridge for the day worked pretty well. Once the rice has been warmed through and mixed thoroughly with the leeks (or in my case, scallions) that gets divided into bowls, sprinkled with the crunchy garlic and ginger bits, drizzled with soy sauce and sesame oil, and finally topped with a fried egg (I love doing this).
The first few bites of the rice weren't anything special. I added some extra salt and pepper with a little bit more soy sauce and then it really started to grow on me. Christine was less than impressed and would like me to never make it again. I liked it enough to keep the last portion for leftovers and even brought an egg to work so I could fry it up fresh (we have a stove in our office). I definitely prefer takeout fried rice and even some of the other recipes I've made in the past more. However, I would make this again with a few adjustments. One thing I really liked about the recipe was the texture you get from the garlic and ginger bits. I think I'll use that trick in the future.
The Garlic Green Beans were fine, even though Christine thought I went a little heavy handed with the salt. Some of the recipes in the Food52 Genius Recipes cookbook are more techniques then recipes. Sure there are a list of ingredients and steps to prepare them, but just sautéeing beans in butter before adding garlic and salt hardly seems like a recipe, to me at least. The point of the recipe was that you were first browning and then stewing the beans in their own juices. This eliminates the traditional step of blanching them first, but I rarely do that anyway. I prefer roasting most green vegetable with olive oil, salt, and pepper. In the end it was an okay meal, but I doubt I'll make either of these recipes again as written.
books cookbook Food Resolution