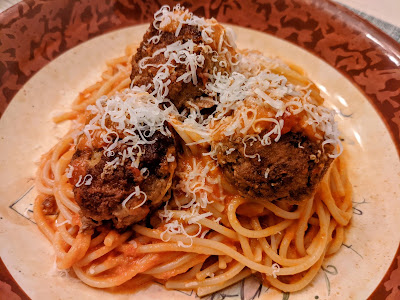 These two recipes are referenced in the book to be used together, so that made Sunday's dinner decision very easy. We eat a good amount of pasta in our household, at least once a week. It helps that two of our three kids will eat it without question. That means two less plates I'm having to prepare when I already have a kitchen full of dirty dishes. It didn't help that I made two loaves of bread and a batch of Olive Oil & Maple Granola before starting dinner.

The meatball recipe is from Rao's, the famous NYC Italian restaurant and line of foods, and it is wild. I've made meatballs a handful of times before, but never anything like these. Most recipes found online follow very similar base ingredients, with a small change here or added thing there to make them different. They are all meatballs after all. This recipe however is strange with a capital S. It calls for 1/2 small clove garlic...not a 1/2 of a bulb, a 1/2 of a clove! That's basically no garlic at all. Not wanting to be wasteful, I just used one whole clove that was on the smaller side. There is no other seasoning other than parsley and salt. I'm used to basil and oregano too, but needed to follow the recipe. Then comes the weirdest part of all...2 cups of water. Milk is common and I've even seen mayo, but 2 cups of water? I'm to thought I was going to have meat soup. There was no way that was all going to get absorbed. Of course, I was wrong. The two cups of fresh bread crumbs I made, from slices of a french loaf toasted in the oven, just soaked it all up.

The recipes makes about 28 meatballs and that's just about what I had. I lost count as I was "sampling" them coming out of the pan. I kept six aside after cooking them in olive oil and then froze the rest for future use. I think meatball subs might be on the menu next week. As per the recipe, I added the reserved meatballs into the Tomato Sauce with Butter & Onion for 15 minutes. That title is all that's in the recipe other than salt. I felt like my Italian card might get pulled for not adding even a tiny bit of garlic in there. But I stayed true to following the recipe as is and wow.

I don't know how such simple ingredients made such a delicious and light sauce. It reminded me a bit of the sauce I was making over the summer only it was even lighter tasting. My problem with a lot of red sauces are how heavy they can be. It's not that they're not good, I just don't want that every time. We don't like a thin but chunky sauce, so I blitzed everything up for a few seconds using an immersion blender after removing the meatballs and pieces of onion. The recipe says to throw the onion away, which I mostly did but not before snacking on a few small pieces that were so soft and flavorful.

Instead of Parmesan-Reggiano for topping the pasta, I used some of the leftover Romano that went into the meatballs. It's a sharper cheese and it tasted wonderful all mixed together. I will make this incredibly easy sauce many more times when I want something lighter than my mother's homemade meat sauce recipe. I can't wait to use our fresh grown tomatoes in this recipe. The imported Italian tomatoes I used were good but fresh will probably make this recipe sing even more.