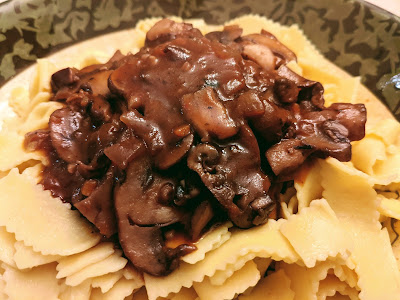 One of the biggest obstacles in the movie Julie & Julia, is the protagonist's attempt to make beef bourguignon. It's a somewhat involved dish that takes a long to to cook because of the tough cut of meat in the recipe. If you replace the meat with mushrooms, a food that gets tender rather quickly, you have a very similar dish in a fifth of the time. I was tickled to find a recipe in the cookbook like this as I am trying to cook through it, just like in the movie. However, this recipe wasn't nearly as big of an obstacle, nor did I *spoilers* fall asleep while waiting for it to cook.

Like many of the recipes in Food52 Genius Recipes, it's not an over involved recipe with all sorts of ingredients that are hard to find. You take some veggies, aromatics, stock, and a little wine to create a rich dish that makes your house smell absolutely amazing. You know how a food smell can permeate overnight so it's the first thing you smell when you enter the kitchen the next morning? Sometimes that's not a good thing, but waking up this morning to the smell of mushroom bourguignon just made me hungry knowing I'd be eating it as leftovers for lunch.

The book suggested serving this over egg noodles, but buttered potatoes, farro, or polenta work well too apparently. I had an egg pasta that I've been wanting to use from Aldi and it ended up being the perfect vessel for the rich and almost creamy sauce. The only deviation from the recipe I made was whisking some of the liquid in the pot with the beurre manié before adding it. I'm sure it would have dissolved just fine putting it in whole, but this guaranteed that it wouldn't leave any clumps of the mixture. It was my first time making this type of thickening agent. It's very similar to a roux, since it's the same ingredients, but they don't get cooked first so I was a little hesitant just dropping a dough ball into something I spent over a hour making. In the end, it worked out perfectly.

I've made beef bourguignon once and I think I prefer that over this dish. Don't get me wrong, this dish is amazing and a wonderful dish that you could serve to vegetarian or even vegan family and friends, depending on what you're serving it over. I will definitely make this dish again when I'm craving the flavors it has, but don't feel like waiting 6 hours for the beef proteins to break down. Next time I might add some chives or sour cream as suggested as optional additions. We sprinkled a little Parmesan cheese on ours since the kids had it with their buttered pasta. I know the recipe didn't call for it, but I liked the extra salt kick from the cheese.