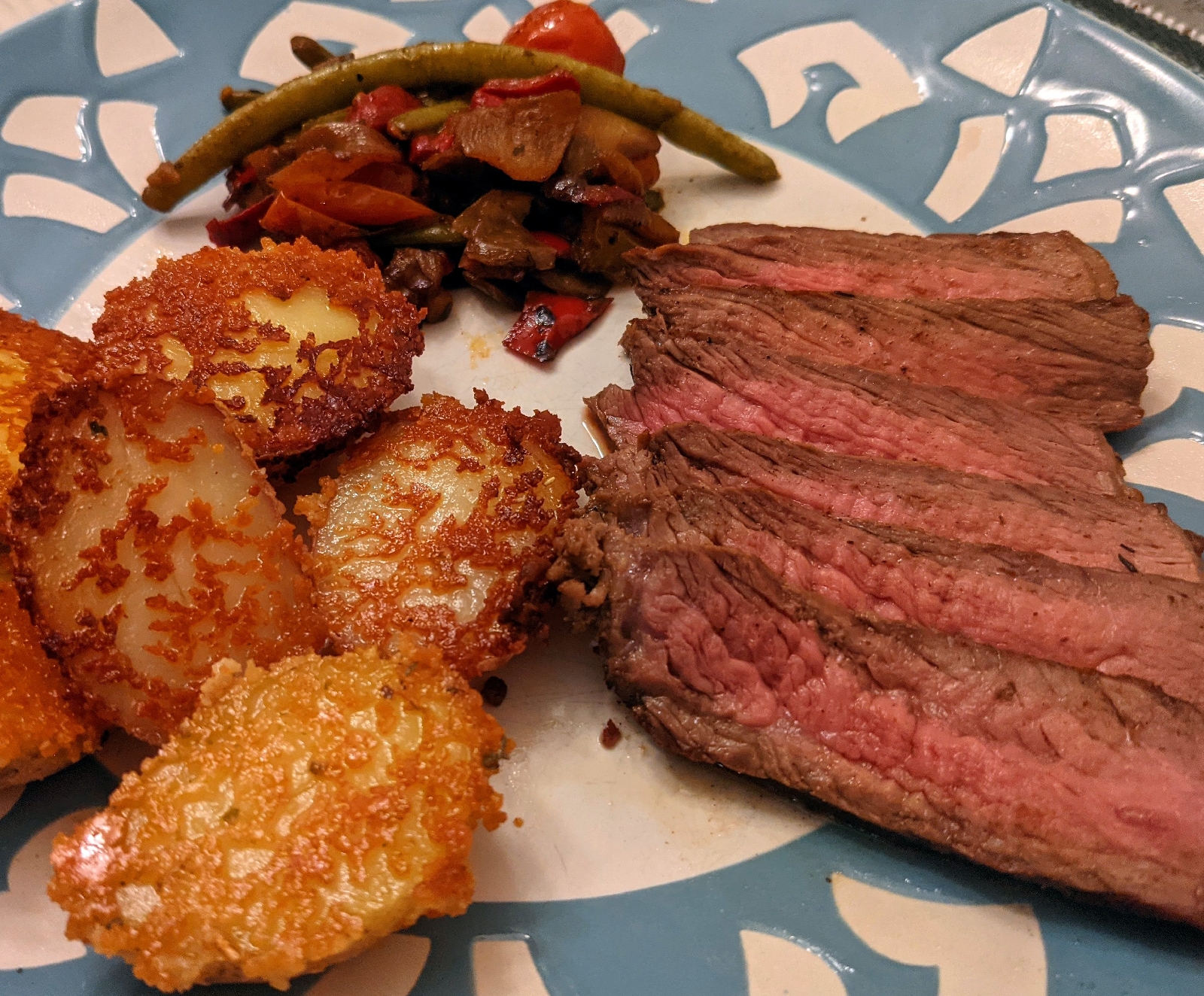 Started off the year making Perfect Pan-Seared Steaks as the first recipe from Food52 Genius Recipes. This recipe came from one of my favorite food personalities and recipe creators J. Kenji Lopez-Alt. If you're familiar with Serious Eats, it's almost certain that you've made one of his recipes. I've actually made steak using this technique before because of Kenji. Since I had a sirloin steak in the fridge, I figured why not start the new year off right?
I generously salted and peppered the steak about an hour before cooking. Next time, I'm going to let the steak sit in th fridge for a couple of days after seasoning to see how much of a difference that makes. Using my cast iron pan, that is so close to being perfectly seasoned, I heated up oil until it started to smoke and then added the steak. Flipping the steak every 15 to 30 seconds makes getting a great sear on both sides incredibly easy. By the time the outside develops a dark brown crust, it's nearly cooked to medium rare. Letting it rest for at least 5 minutes and it gets to just medium. About 2 minutes before it was done, I added some butter, thyme, and smashed garlic.
It came out great. Using that technique is a lot easier and more forgiving than hard searing on one side before flipping it over and doing the same on the other side. I normally do the one flip sear before finishing it in the oven, but this is a near fool-proof way to cook an expensive piece of meat. If you have a meat thermometer, that takes the guesswork out completely.
For the vegetables, I just finished off a frozen bag of fire roasted veggies in balsamic glaze from Aldi. The potatoes were a new recipe not out of the cookbook. They're Parmesan Baked Potato Halves and they very, very tasty. They are all also very easy to make. Just add melted butter to a pan, add parmesan cheese and preferred seasonings, and then place the potato halves on top cut side down. They go in the oven for about 40 minutes and come out crispy, creamy, and buttery. The butter browns to give off that wonderful nutty flavor. I will definitely be making those again.
All in all, it was a good meal that didn't take a ton of effort to make. These are the type of dishes that are perfect for weeknight dinners after a long day at work or whenever you don't feel like putting forth a ton of effort. Perfect Pan Seared Steaks were the perfect recipe to start with as I cook my way through the book.
books cookbook Food Resolution