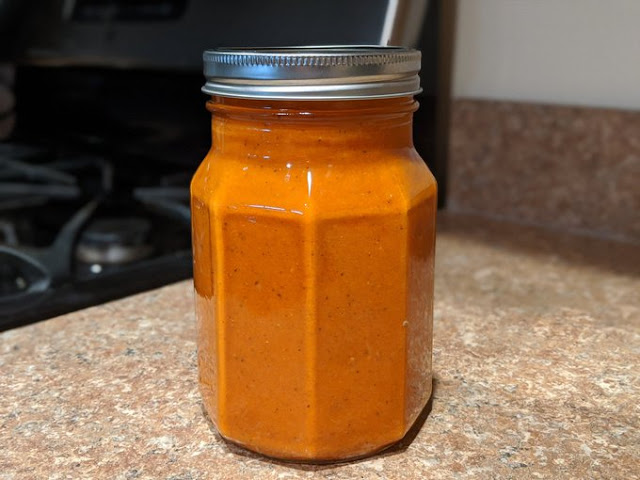 This isn't going to be the longest post ever, but I wanted to share a recipe that we've been enjoying over the past month or so. Because we planted two types of cherry tomato plants this year, we've had an abundance of production and weren't sure what to do with them. We can only make so many tomato-cucumber salads and eat so much salsa or pico de gallo with nachos or tacos. The default thing to make with tomatoes when you tell people you have too many is...make sauce! I never considered using cherry tomatoes in sauce before because normally one blanches and peels tomatoes before making the sauce. The reason for this is because the skins of tomato won't break down if you're just simmering them. Having to peel hundreds of little tomatoes sounded awful, that was until I found many recipes that called for roasting them first.

Roasting is probably my favorite form of cooking behind baking. You can make virtually anything taste good by drizzling on some olive oil, sprinkling on salt and pepper, and maybe adding a couple other spices that would go nicely with the dish. It made a ton of sense to just roast these little guys until they popped and shriveled a bit. Cooking them at a high heat allowed for them to expel their juice and caramelize a little. While they're in the oven, you just saute an onion and some garlic before adding the tomatoes to the mix. Add some spices, let simmer for an hour, and then hit the whole thing with an immersion blender and you have a relatively quick sauce that's light and incredibly fresh tasting.

Since making the first batch as suggested in this recipe from Fork Knife Swoon, I've made it two additional times with changes to both batches. While I thought the sauce on its own was very good, I couldn't help but think some meat would give it extra flavor and "beef" it up a bit. For the second batch I just browned some ground beef to render the fat out and then removed the meat and set it aside. I cooked the onions and garlic in that fat with some additional olive oil. After letting the sauce simmer and then blending it, I stirred the beef back in until well combined. Christine loved this version and said she thinks she likes it even better than my normal sauce (very high praise!). For the third batch, I subbed out the beef and tried the same thing with pepperoni. It turned out okay. The flavor was good, but adding the rendered pepperoni back into the sauce was a mistake. It got kind of leathery since it was sliced so thin. In both of the later batches, I incorporated some of the spices that I like in my normal sauce including oregano and celery seed instead of the thyme.

So if you have a couple pounds of cherry tomatoes and you don't know what to do with them, definitely give a recipe like that one a try.