If you know me personally or follow me on social media, you know that I have struggled with my weight and the will to exercise. I've written about my trials and tribulations many times on this site. This post will be similar to others because it's highlighting a new tool that has really helped me, as well as being an update on where I stand health wise.
Let's get the update out of the way first. I weighed 177 pounds in July of 2019. From there it was a slow creep upwards as the weather got cooler. By November I basically stopped doing any exercise, including my daily walk, which didn't yield much in the way of weight loss. What I didn't realize was that daily walk was doing just enough to keep me from gaining weight. My daily steps plunged, but I was using our stationary bike periodically so I thought it would sort of balance things out. I wasn't using it daily, so I wasn't burning the same number of calories each week. I saw this everyday as I entered my calories, something I've still been doing all along, but apathy was getting the best of me.
By the end of December, a year since getting below 180, I was sitting around 185 pounds. This in itself was still quite a feat for me. I'd kept most of the weight off for a whole year, something I really didn't think was possible. On the other hand, I'd gained 8 pounds from my lowest weight and I was frustrated with myself about it. However, that still didn't motivate me because I was able to keep right at 185...until the beginning of May. I don't know if I'd had a lot of salt in the meals prior to stepping on the scale or what, but one day the scale read nearly 190 pounds. This was unacceptable. The scale crept back down in the following days that week, but it was the wake up call I needed.
That's where Darebee came in. I scoured the internet for workout programs that I thought might work for me. I knew I needed something that I could incorporate slowly into my daily routine because otherwise I wouldn't do it. I'm very much a creature of habit, so shocking my system with a more involved and difficult workout routine will not work. Darebee seemed to be the exact thing I was looking for. It's a non-profit and also an ad-free and product placement-free website that hosts hundreds of individual exercises and workout programs. Because almost all of the exercises don't require extra equipment, I figured this was a good place to start.
I started by doing the Daily Dare, which is a single exercise that you do for so many minutes or reps. I do that every day and have learned a bunch of new exercises that I'd never done before. After that, I chose a few basic workouts that focus on various muscle groups and alternate doing them throughout the week. One focuses on chest and back, another on arms, one is for abs, and the last is for legs. I also found an easy yoga routine that I like to do before bed. Once I got those things down, I found one last thing that has really kept me motivated and that is their RPG Fitness Program called Zero Hero. It's a fitness adventure that has a story line over 30 days, with each day having a different exercise that corresponds with what happens in the story that day. Here's the first day: 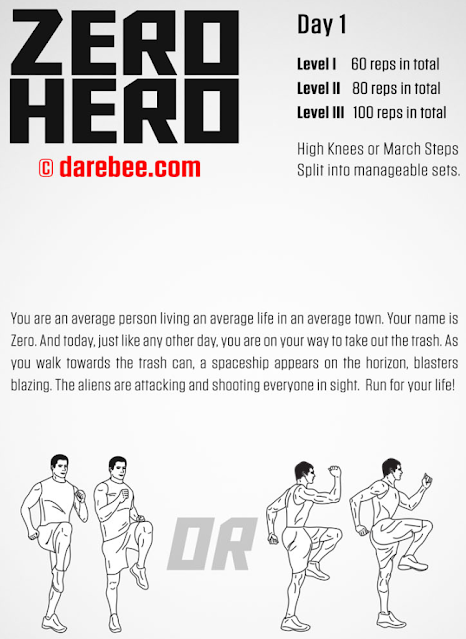 As you can see, you can make it harder or easier for yourself depending on your fitness level. Today marks day 30 of the program for me, which means I'm done with this one. I liked having a short story to read each day, even one that's sort of all over the map as this one was. Checking off the boxes on the website for each completed day also gave me a sense of accomplishment and a goal to work towards. Tomorrow I will start a new program called Hero's Journey. It's a 60 day program that's a step up in difficulty and it has a more detailed story with a choose your own adventure element. There's a 60 chapter program with a digital map called Age of Pandora that I plan to do after I get done with this new one.
Because I'm now locked into a fitness routine and really watching what I'm eating, I'm also super motivated to get outside as often as possible and run around with the kids or walk with them while they ride bikes. To take it one step further, I decided to do the monthly challenge for June on Darebee. This month it's Punches & Squats. On alternating days, you do increasing numbers of punches or squats until the month is over. Between this challenge, my weekly exercise routine, increased daily steps, the RPG fitness program, and general play with the kids, I expect to be in better physical health than I have ever been.
I'll keep my eye on the scale, but I'm also looking to build more muscle so I've shifted my focus more to body fat percentage going forward. I know I'll probably lapse at some point in the coming months and/or years and that's okay, as long as it doesn't get out of hand. For now I'm going to keep doing what's working for me and see where it takes me. If you're struggling with weight or fitness or are just looking for a good place to start, I can't suggest checking out Darebee more.
Health Life Weight