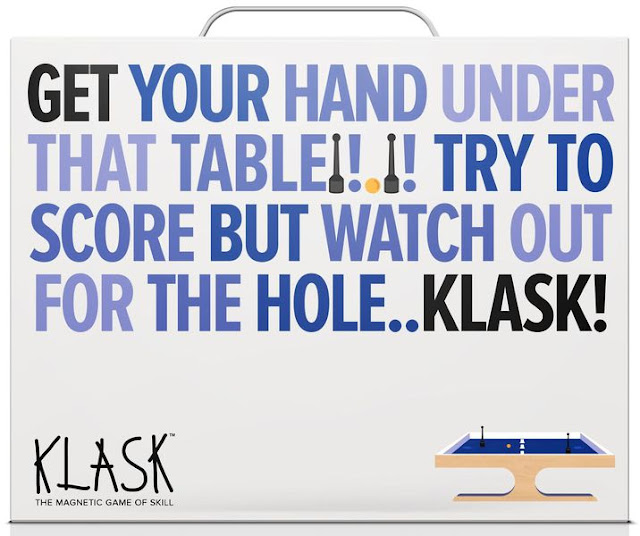 It's very rare that I buy a game AFTER playing it. It's even more rare that I buy a game that has never been on my wishlist. Most of the games I get are either gifts or games I've done a bunch of research on before trading for or buying them. That all changed after this past weekend. I received a text from my friend Shawn asking if I want a copy of KLASK because it was on clearance at Target. I knew the game, but didn't think I NEEDED it so I passed. The next day we went over to play games with him and Kelly and I fell in love with the game immediately. Christine said "you should have gotten one", which means we definitely need to add it to the collection.

Before I finish the story, let me explain what KLASK is all about. There is an elevated game board that looks like a soccer field with circular goals, a small yellow ball, two gaming pieces that are controlled by magnets under the board, and three little "white biscuits" that are magnetic. The object of the game is to be the first player to score six points. What's interesting is just hitting the yellow ball into the opposing goal is not the only way to score. Players also score if one of the following happens:

One review I read used this as a descriptor of why they played it so much: "It’s 80% as fun as foosball or air hockey but 5% of the size." That description couldn't be more spot on, in my opinion. As you can see in the picture below, it takes up very little space for a dexterity game of this type. I agree that Foosball is more fun and having a table would be awesome, but they take up a ton of space and the kids aren't quite old enough yet to play. Air Hockey is really more comparable and their tables are ridiculously large. Honestly though, I think KLASK is the better game hands down.  Having to deal with the aforementioned white biscuits and possibly falling into your own goal and thus giving your opponent a point, change the dynamic so drastically. 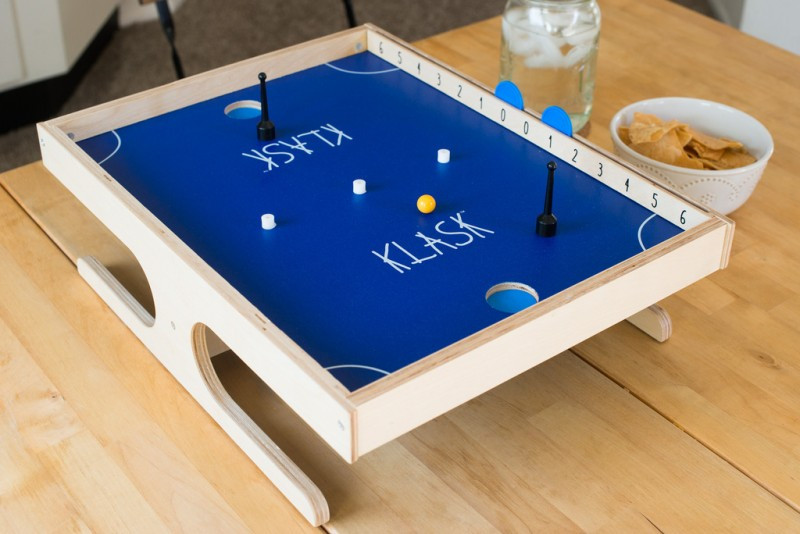 The extra ways to score make the game so interesting and very tactical. Unlike in Air Hockey, just hitting the ball hard isn't always the best strategy, especially because the ball has to stay in the goal. Hitting the biscuits into your opponent's section cuts off their ability to move and using the ball to get biscuits to stick them is very satisfying. An opponent scrambling to block the ball could cause them to fall into their own goal, so hitting the ball off of the walls can make them slip up as they track the ball's path. Players can play defensively by just blocking their goal, aggressively up near the mid-line, and every way in between.

Back to the story. So getting home on Sunday, I checked our local Target's stock online and it said they still had some. I hoped there would still be at least one the next day. When I woke up Monday morning, all I could think about was getting to Target as soon as they opened. I'd never been so excited to go buy a game in my life. I got to Target a few minutes before they opened and waited until I saw an employee unlock the doors. I got out of my car and walked briskly towards the entrance to be the first one inside. As Shawn put it, I was ready "to go full Jingle All The Way-mode" on anyone else who might be headed where I was going.

I thought I heard footsteps right behind me as I navigated my way through the empty store. A quick glance over my shoulder revealed nobody else, so the footsteps were my own and I was just being paranoid. In that moment, to steal a line from American Psycho, "relief washes over me in an awesome wave". That relief is short lived as I start scanning the shelves and not seeing the blue and white box I'm pursuing. I remember that I was told it wasn't on the main wall of games, so I check end caps and down each aisle of the toy section hoping that it is somewhere else. That's when I see a big open space on the bottom shelf and my heart sinks. 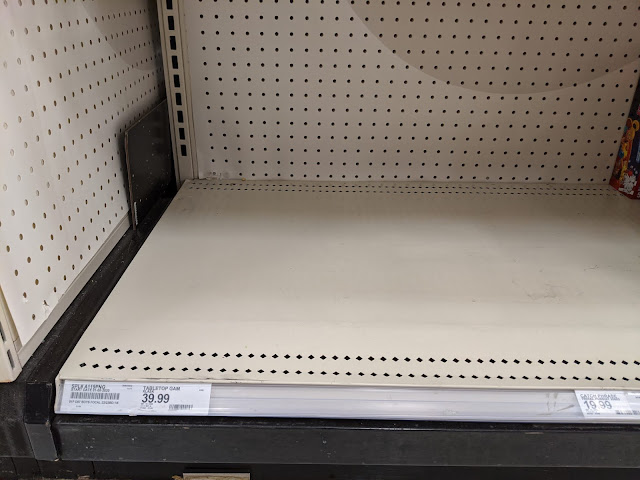 This has been a very disappointing trip. "It's not the end of the world," I think to myself. I could always trade for it or wait for somebody to have it on sale. Not wanting to give up quite yet, I open the Target app on my phone and check the inventory again. It says it's still in stock, but I know what the site says isn't always correct. As I do a cursory check in a mostly bare shelved aisle, I see an employee walk by. "Excuse me, would you happen to know if you have any more of these?" I ask as I show him my phone. I continue as he glances down at the screen, "It says they're in stock, but I know it's on clearance so they might all be gone." Without a word, he looks straight ahead and turns a box that's at chest level. My grail was right beside me and nothing was within four feet of it. "Thank you, I don't know how I missed it," I said as the man walked away. 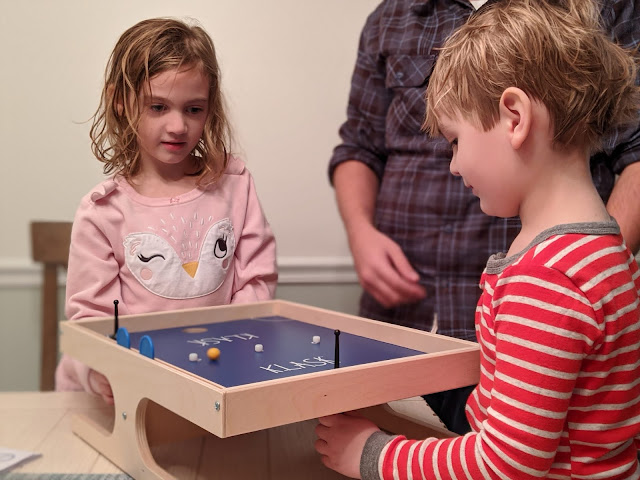 After baths and before bedtime, I took the game out of the box to play. Grace always wants to play new games when they enter the house, but normally they're too advanced for her. However, this one seemed like something she could handle so I played a bit with her. Then Ben came out and wanted in on the fun, so let the two of them play to get a hang on using the magnet to move their gaming piece and hit the ball. They were upset when it was time to put it away and even the promise to play again the next day wasn't enough to pacify them. I already knew that for $19.98 I got an amazing game, but their reaction to it was priceless. I look forward to playing many, many games of KLASK.
Tabletop