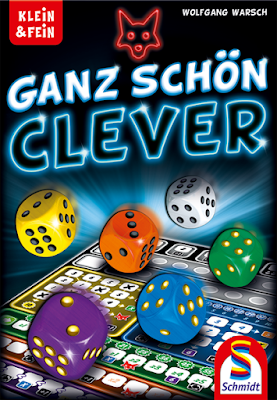 I haven't played a lot of roll and write games but when I heard that one got nominated for the Kennerspiel des Jahres, I really wanted to check it out. Over 100 games later, I'm addicted to Ganz Schön Clever. You might not know what a roll and write game is but if you've ever played Yahtzee, then you've played one. The object of this type of game is to roll a set of dice and then write on some sort of scoring sheet. In Yahtzee, you're looking to roll a certain combination of dice to score the most amount of points possible. In the past few years, these types of games have evolved into some really strategic and enjoyable designs.

Ganz Schön Clever (roughly translated as “Pretty Clever")  plays 1 to 4 players but all of my games have been solo. Over six rounds in a solo game, you "roll and choose your dice and enter them into the matching colored area, put together tricky chain-scoring opportunities, and rack up the points. The dice you don't use are as important as those you do, because every die that's smaller than the chosen one can be used by the other players, keeping everyone in the game at all times." In a one player game, you simply lose access to the lower valued dice you don't choose for that part of the round.

As you mark the five different scoring sections on the board, you're scoring points and unlocking bonus actions and scoring opportunities. This isn't a review or how to play post so I'm not going to go into detail on how each section works, but it's balancing them all that makes this game so addicting. I think roll and write games are fine. I've never been a huge fan but will play them. That all changed when I found the link to play Ganz Schön Clever free online. I'll play a game or two when I have a free moment or even a dozen or so after everyone else has gone to sleep. 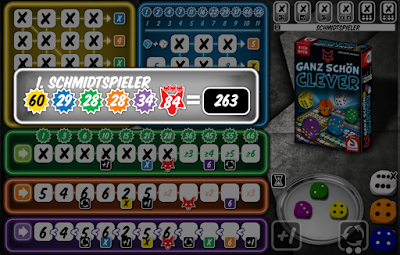 What makes it so addicting for me is trying to beat my high score. To be declared clever, you need a score above 280. The picture above shows my all time best score of 263. When I first started playing and didn't quite understand the strategy I was scoring in the low 100s. Now I'm currently averaging somewhere around the "Great result!" and "Hat's off to you!" on the scoring chart which fall between 180 and 219. But it took around 40 or so games for me to really find the balance. Even when you do, the dice aren't always forgiving. If you don't have a reroll available, it can really screw you so you have to be smart when using those.

If you like roll and write games, this one is a must play. I'll probably pick up a physical copy of this to try with more players. Even if it doesn't go over that well, I know I'll play the hell out of it. I think it might be the fastest game I've played 100 times. It joins STAC, Star Realms, M:TG, Palace, Can't Stop, Yahtzee, Blokus, 7 Wonders, Hearts, 6 nimmt!, and Quoridor in the 100 plays club.
Tabletop