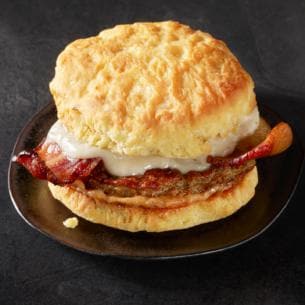 Starbucks needs to stop making food. Offer a muffin or a danish or a slice of pound cake because they all go with a cup of coffee. But I've probably had a half dozen different sandwiches and none of them are ever any good. So why did I stop and get another one? Well, I wasn't feeling any of the breakfast items at home and had a gift card that I received. I was just going to get a muffin or chocolate croissant but I wanted something with protein and I love biscuits.

The description of the Chicken Sausage & Bacon Biscuit from the Starbucks website: "Our baked-from-scratch cornmeal biscuit is the base of this sandwich and it gets even better from there with chicken sausage, double-smoked bacon, country-style gravy and spiced honey butter." Sounds pretty good right? I mean it looks pretty good. Well, it's not.

Let's start off with the positives. The chicken sausage patty was one of the better ones I've had. I would prefer pork sausage but it certainly held its own. The spice and pepper mixture gave it a lot of flavor. It was juicy and had a nice snappy texture when I bit into it. The country-style gravy did a good job of providing moisture but got lost against the flavors of the sausage. There seemed to be a good amount of it on there but the sandwich so hot that it soaked right into the dry biscuit. That's as far as the good part of this sandwich goes.

On to the negatives. As I mentioned, the biscuit was dry. That's probably because Starbucks assembles and reheats everything to serve it hot. The second blast of heat doesn't help. Since it's a cornmeal biscuit, it's never going to be a tender and flaky as a traditional biscuit like you might find at Chick-fil-A. The spiced honey butter was nowhere to be found. Had I not looked up the description, I wouldn't have known it was included. It's possible it aided in keeping things from being dry but the flavor just wasn't there.

My last and biggest problem is getting it's own little paragraph here. The bacon. The bacon was horrible. I had a small crispy bit that stuck out from the biscuit and it tasted good. But 95% of the bacon was sandwiched between the sausage patty and the top part of the biscuit and it was practically raw. I mean it's cooked because it's "double smoked" but there was no crispiness to it and the fat wasn't rendered at all. There is nothing less appetizing than taking a bite of bacon, only to have it be so soft that it stretches as you try to pull it way from your mouth. I took most of it off before finishing the sandwich.

This might have been a quality control issue but time after time and location after location, I'm disappointed. I don't drink coffee and none of Starbucks' baked good are worth me going out of my way so unless I have a gift card that Christine can use, I don't plan on ever stopping at one again. Fool me once shame on you, fool me a half dozen times...well that's on me. But their sandwiches aren't worth the calories.