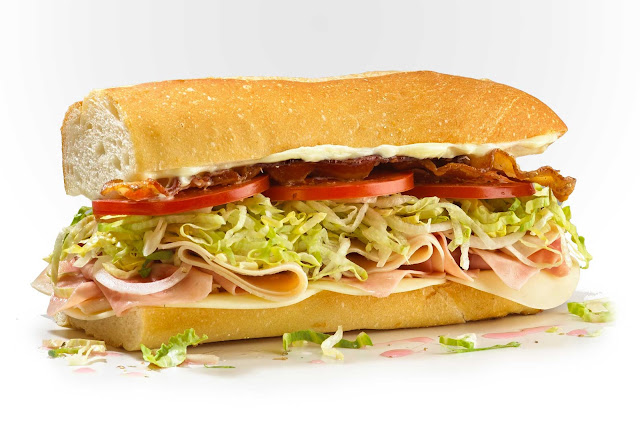 You know when you go to a store or restaurant and they ask you if you want to join their rewards club? Say yes, say yes every single time. It costs nothing and you might get free stuff. If you don't want a zillion junk emails, because you will, create a secondary email address specifically for this. That's a tip from me to you. I signed up for the Shore Points™ Rewards system that Jersey Mike's offers and I was pleasantly surprised that for your birthday they send out a free sub and drink coupon. I saved mine for a while but finally used it a few weeks ago.

I've had many subs from Jersey Mike's because we use them to cater one of our meetings at work each quarter. They're very similar to other sub places like Subway. They serve subs and wraps made with sliced deli meats and cheeses. Jersey Mike's also has a large menu of hot subs that include about a dozen cheese steaks, chicken parm, and a few other types. What I've enjoyed about them the most is their consistency. Part of that comes from how they freshly slice the meat and cheese for each sub.

I've always been a fan of deli meat because I grew up eating it. So I look forward to enjoying a deli sub when I know it's going to be good. I went with the Club Sub which contains turkey, ham, provolone, applewood smoked bacon and mayo. When asked, I opted to get it done up Mike's Way (sliced onions, shredded lettuce, tomatoes, oregano, spices and "The Juice" - a mixture of red wine vinegar and olive oil). All of this is served on an airy sub roll that has a crispy exterior.

The freshness of the ingredients in my sub put it far above those from other chains. The turkey and ham were of great quality and weren't sliced too thick. There's nothing worse than thick sliced deli meat, the thinner the better. The bacon was completely crispy and added some crunch and texture to the softer ingredients. The right amount of moisture was there by having the tomato, mayo, and "The Juice". Lettuce and onion contributed to the crunch, while also making me feel like I was being somewhat healthy as I ate the whole thing. Layered provolone along the bottom part of the roll kept the bread from being soggy and gave it some salty flavor and creamy texture.

Deli subs are pretty standard from a flavor profile, so it's hard to explain how they taste different than other places but this sub was really good. This won't be the only review that I'll be doing from Jersey Mike's.