When a training class goes bad 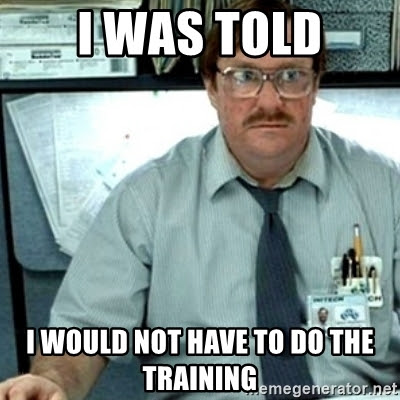 I attended a mandatory cultural competency training last week that was probably the worst educational experiences of my life. Thankfully, it only lasted two hours and sixteen minutes. The section I work for organizes a similar training that lasts all day and is very engaging. It's for both state and non-state employees, where as the one I recently attended is just for certain state employees. I was hoping that our longer training would be accepted in place of the shorter one being taught from within our division. Unfortunately, that was not the case so off I went.

Roughly forty people, from various sections and pay grades, sat at tables facing projection screens. We all filled out our little name card tents and waited patiently for the training to begin. One of the two instructors introduces themselves and gives a quick summary of the class. They turned it over to the the main instructor and that's when it all started to go down hill.

We spent over thirty minutes of the scheduled two and half hours doing an icebreaker activity. It involved drawing a license plate that gave everyone information on your cultural background and then sharing it. This would have gone much quicker if we started at one end of the room and went in order. But that didn't happen and that's what should have clued me in that this wasn't going to be a good day. The instructor asked for volunteers and of course this turned into pulling teeth because nobody wants to share. That would a recurring theme through the morning.

The majority of the training was reading slide after slide of a power point presentation that was projected onto the screens. Each slide contained at least one open ended question that the instructor would read and then stand there waiting for an answer. And with every slide came an awkward silence that brought me back to my grade school years. A good teacher would have just called on people to answer after the first two or three questions went virtually unanswered. I mean, we wrote our names on the tent card for a reason right?

And then it happened, the event that would cause the instructors to lose the class. The one person who kept answering the questions, as to save us from elongated bouts of silence, answered a question that didn't sit quite right with another. The answer the woman gave was fine, but it was the instructors agreeing with her that led to some confusion.  An older gentleman sitting near me started questioning the purpose of the class if what the woman said was true. He said he understood what she said and agreed with her but wanted to "play devil's advocate" for a second...uh oh.

That second turned into a thirty minute rant that the instructors could not seem to curb. Every time they cut in, he'd double down. "I agree with your point, but..." he'd interject over and over. Another person finally was able to pull it all together and explain what each person was saying to the class. Adding a joke in there broke down the hostility and allowed for the instructors to move on. But it was over, the class couldn't be recovered. It felt like dad just hit mom at the dinner table and now we all have to sit there and finish our meals like it didn't happen.

After all of that, we only had 35 minutes to go and we were barely half way through the material. So what did the main instructor decide to do? If you guessed going right back to asking open ended questions and waiting for answers, you're right! The other instructor motioned to the main one, who then clicked through her remaining three slides and handed the clicker over. Maybe a change of instructors would help...or not so much.

Every slide from then on out was questioned by the room. Most of the questions had nothing to do with the class, people were just being picky. After the third slide had a dumb question asked about it, that instructor clicked through the remaining ones to one that said "Any Questions?". There were none. The class ended on a whimper. We still had 14 more minutes available. It was amazing. We were instructed to fill out the survey to grade the class and then leave.

Nobody said a thing. No thank yous, no see you laters, nothing for the instructors. As I walked out, I saw the instructors talking to one another. They weren't saying anything loud enough to hear but there was a lot of body language and faces being made; a lot of shrugs, head shaking, and eye rolls. It was a terrible training and they knew that. I don't know if it was just a perfect storm of abbreviated material, poor knowledge on the subject, and a room full of people not interested in sharing, but it was bad. It was uncomfortable. It was hilarious.

Just when I thought the hilarity had ended, I was in for one more treat. The automatic doors at this building don't work well. As everyone is headed toward the door, a woman is just standing in front of the motion censor and nothing is happen. Two more women join her, all three of the just standing and waiting. The man who tried to save us from a terrible class walks up and pulls the door open. "We're like cattle waiting to be herded," one woman says. The man turns to her and says, "When in doubt, call a man...oh that wasn't very culturally sensitive me." He laughs and we all walk to our cars.

He was the hero we needed, not the one we deserved.
Work