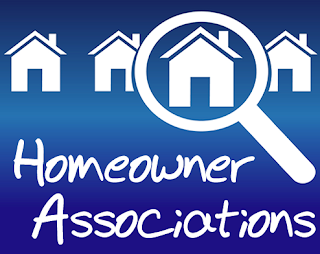 I live in a neighborhood that will eventually have a Home Owner's Association (HOA) run by the residents. Because the neighborhood has not been completed yet, a management company currently runs the HOA. They, along with the developer, make and enforce the rules. As far as HOAs go, ours isn't too bad when it comes to restrictions. There are a lot of normal things like the houses have to similar colored vinyl siding, trash cans need to be kept out of sight, and you can't have trailers or boats in your driveway.

Our HOA dues are dirt cheap for what we get. We currently pay $278 a YEAR for: a pool, landscaping of common spaces, entrance maintenance, plowing, and lawyer and administrative fees. I would pay $278 for the pool alone. That cost will go up a bit because of a pool attendant we've decided to keep, they turn people away who aren't from our neighborhood. In my opinion, it's worth it because outside people getting into the pool was huge problem since it opened.

If you know anything about me or my politics, you know that I'm not a fan of authority or anyone telling me what to do. That being said, I think the rules are very reasonable for the most part. There are some things that the community would like to be amended so that's being looked into. I may be a part of making those changes happen because I recently accepted a spot on the steering committee. The steering committee has no real power but it works on behalf of the residents to talk with the management company and developer to address issues in the neighborhood. I haven't attended my first meeting yet but I'm excited to be involved in improving a place where I have a stake.

Recently there was a discussion about adding a bath or club house next to the pool, something that was always supposed to be added. The community overwhelmingly voted it down because nobody wants their HOA dues to double. It's understandable to want such a building for those who use the pool, my family included, but the math just doesn't added up. The increase would pay for the initial building and upkeep but then the dues would stay at that amount and I think that's where a lot of people voted against it. It doesn't make sense to continually dump all of the extra money into a reserve. There is only so much that we need to pay for as far as upgrades or repairs for the neighborhood.

The biggest problem with the HOA right now isn't the management company that runs it, though they do have their issues, but the residents who aren't paying their dues. We're currently missing nearly an entire year's worth of dues from our account, it equates to roughly $55,000. That is a crazy amount of money that has yet to be collected and would be enough to build a bath house and pay for the pool attendant for two more years. There is only so much that the HOA can do to try and retrieve those funds, most of which will cost a good portion of the total in fees to lawyers and collection agencies. But that's the rub when you live in what's essentially a collective.

We've enjoyed most of our time in the development and will probably be staying for at least another 3 to 5 years, but some things need to change. I'm not sure if I'll be able to be effective in making those changes happen. However, I'm going to do everything I can to help our community be the best that it can while work along side people who don't always see things the way I do. Whether I'm successful or not, we plan on moving to a single family home outside of an HOA with our next purchase. Unless we hit the lottery, in which case I'll give the first person who asks the keys to our townhouse. 😂
Home Ownership Life