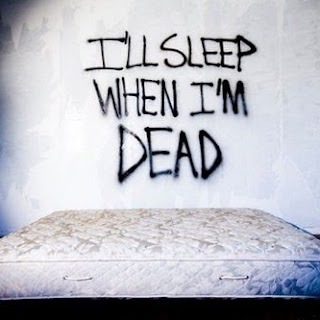 To say I hate sleeping would be taking it a bit too far but if I never had to sleep again, I would do whatever it took to do so. I don't hate sleeping because I'm a poor sleeper or something. I imagine not being able to stay sound asleep each night has to be similar to the worst kinds of torture. When I fall asleep, ninety nine times out of a hundred, I am out cold and virtually nothing isn't going to wake me up. For those of you who live in Syracuse and remember the Labor Day storm of 1998, I slept right through it. I've slept through a few hurricanes since moving to Delaware too. Aside from crying children, even that doesn't do the trick every time, I can sleep through anything. But my ability to sleep like a rock isn't the point of this post.

Sleep is overrated. Sleep is a waste of time. Sleep is a bane on society. I understand that we have to sleep because it's needed for our overall health. It allows our body to rejuvenate itself and restore what we've lost while being awake. It allows for our brain to essentially repair itself, develop new memories, and make new connections. There are theories that organisms began sleeping to protect themselves from danger and as a way to conserve energy, not needing to feed as often. The benefits of rest and sleep are well documented, but aside from the physical and mental benefits it is a detriment to us as individuals and as a society.

Imagine how much you could get done if you didn't have to sleep. We all complain that we don't have enough to do the things we want. Well that would almost cease being the case if we all had another six to eight hours added to our day. We'd probably need to have another meal thrown in there but that would still leave us with most of that extra time. I'm sure that having that extra time would devolve into the phenomenon that we see when people move into a large space. You "have" to fill that empty space so we'd likely do the same thing with our time. But no matter how much time we have, we'll always have more we want to do. My point is that you'd have time to do some of the things you like to do. I like to play board games, talk to my family and friends, watch TV, see movies, read books, write posts like this one, listen to music, eat, bake, etc. I have very little time to do all of those things so having more time would be a gift that I would love to have.

If we didn't have to sleep, more time could be put towards helping society, helping the world move forward. One of the greatest examples of this would be that cures for cancer and other diseases would be found quicker. We spend such a large portion of our short lives sleeping and that short time is often cut short due to disease. If more time could be allotted towards research and studies to find cures, we could drastically increase the life expectancy of our species. Isn't that one of, it not the, most important things we as humans should be trying to figure out? We waste more time than we do sleeping, doing things that ultimately do not matter and give us nothing in terms of pleasure or better health.

Maybe it's just me thinking about my own mortality, something I've been doing a lot of lately, but being able to experience more just makes sense to me. Don't you want to look into the eyes of your partner, listen to your child tell a story, look at a piece of art, taste your favorite food, watch a great movie, attend a sporting event, have a though provoking debate, hear a touching piece of music, or just sit and observe the world as it passes by, more? You could if we didn't have to sleep. And that is why I think sleep is overrated, a waste of time, a bane on society. We only have so many seconds on this earth, in this consciousness, in whatever all of this is, so why would I want to miss so much? I'll sleep when I'm dead.
Life Sleep