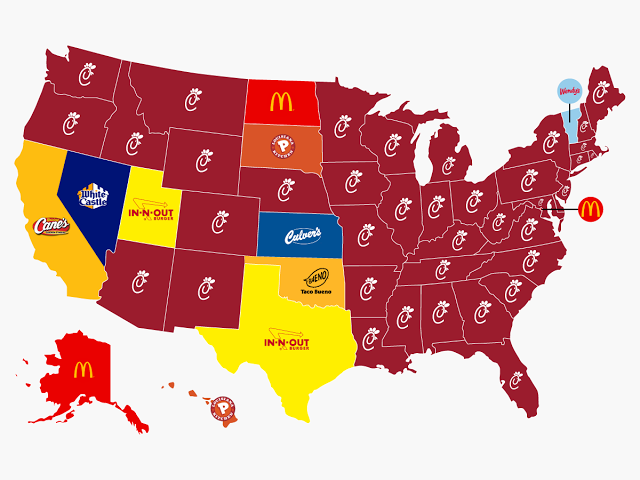 The infographic above shows America’s favorite fast food chains by state according to a study done by Business insider and the team at Four Square. As you can see, Chick-Fil-A dominated (AS IT SHOULD) across the country even in states where it doesn’t have a presence. I shared this in a group text and there wasn’t a much of a question over whether the map was truly representative of what the actual favorite chain was in each state (because there’s no way the map is anywhere close to correct), no instead a debate on what constituted what counts as fast food erupted.

There was a lot of name calling and swearing (mostly by yours truly because I get heated when I think know I’m right), but it was all in good fun like any argument among friends should be. Some interesting opinions were shared and when I woke up this morning, I couldn’t stop thinking about the conversation as a whole.

There is some grey area

Before I go into the differences between fast food and fast casual restaurants, I want to point out that there are some food establishments and products offered that fall into a grey area. They could be debated on what they are but that’s another article for another day. A couple examples: the pre-prepared foods or buffets in a grocery store and Little Caesar’s because of the Hot and Ready Pizzas. I have an opinion on both but I’ll save it for now.

So what’s the difference between a fast food restaurant and a fast casual restaurant?

Typically fast food is mass-produced food that is frozen, reheated, and served very quickly. The food also tends to have less nutritional value and is packaged to go even when dining in at the restaurant. The prices per item average less than $5 and many places have value menus where items can be purchased for a dollar or less. When found as a free standing building instead of in a strip plaza or food court, the ability to serve via a drive thru is almost always present. Normally there is no table service of any kind, you order and pay before receiving your food and then seat yourself or take it to go. Some examples of a fast food restaurant are: McDonald’s, Taco Bell, KFC, Dunkin’ Donuts, and a personal favorite of mine, Chick-Fil-A (Spicy Chicken FTW).

The food served at a fast casual restaurant is priced a little higher, with an average meal price between $8 and $15 dollars. The perception of these establishments is that the food is of higher quality, healthier, and freshly made; in many cases all of these are true. Because the food is normally being prepared to order, it takes a little longer to receive it. The ambiance and décor of the restaurants tends to be nicer and food is served without being packaged for take-out unless instructed. In some places, non-plastic utensils and dishes are used and alcohol might be available. Like fast food restaurants you self-seat after ordering and paying. Some examples of a fast casual restaurant are: Chipotle, Shake Shack, Blaze Pizza, Five Guys, and my personal favorite because I love bread, Panera Bread.

Houston, we have a problem

Now that I’ve laid out the difference between them for you, there’s an issue that needs to be addressed and that is the growing opinion from people who don’t consume fast food and/or fast casual food that it’s not good or isn’t worth the money. In other words, “I’m a food snob who can’t admit that I would want to eat there”. The food served at these establishments is often looked down upon, sometimes for good reason, but it really shouldn’t be because it can be both tastier and healthier than the food you’ll find at regular sit down restaurants or even at home. These places make billions of dollars a year so there’s no way the food doesn’t taste good and in this day in age where calorie counts and nutritional facts are readily available on the menu, finding healthier options is easier than ever.

Also, meals from these places are almost always cheaper to buy than to make, unless of course you want to eat the same thing for days on end to get the overall cost per meal to work out in your favor. There’s also the convenience factor of being able to get a whole meal in just a few minutes. I may not be the busiest of people, but my time is extremely valuable to me.

Before you think I’m one of those people who eats out every day, you should know that I love to cook and bake so I rarely (subjective term I know) order out. In fact, I pack both my breakfast and lunch each work day and I cook dinner at least six nights a week. But sometimes I’m too tired at the end of the day or we have appointments after work or the kids have some scheduled activity. So instead of whipping together something fast like pasta with homemade sauce (I make a giant batch, portion, and freeze for quick meals), it’s easier to just stop somewhere.

Othertimes I just get a craving so I’m going to treat myself; every once in a while I want a few pieces of fried chicken out of a bucket or a burger stacked with meat of questionable content. For anyone with kids, these places can be a blessing because of their speed and more casual nature. We have three kids 4 years old and younger so attempting to go to a sit down restaurant, even a diner, sounds like a level of hell that I don’t want to visit.

Champions of the food world agree

I may be no one of consequence but do you want to know who else likes fast food and fast casual food? Successful chefs and restauranteurs. Like the really talented ones. Here are a few quotes:

“People think Americans are obese and burgers are bad for them—they are delicious. In-N-Out burgers were extraordinary. I was so bad, I sat in the restaurant, had my double cheeseburger then minutes later I drove back round and got the same thing again to take away.”
– 16 Michelin Star Chef Gordon Ramsay

“I treat myself to Popeyes a couple of times a year, and I am wickedly happy downing a few pieces (wings and thighs best) of their crispy, spicy chicken — with a side of dirty rice and biscuits,” Meyer says. “Or I’m completely satisfied making a lunch of a salad from Chipotle, loaded with grilled chicken, pinto beans, shredded cheese, extra cilantro and spicy dressing.”
– 7 Michelin Star Restauranteur Danny Meyer

“My first experience at In-N-Out Burger inspired me to do a hamburger restaurant. I’ve had it in the back of my mind for sixteen years but I haven’t gotten around to it. It’s kind of a secret fantasy.”

The point is, there are a multitude of reasons why one should supplement their diet (because it tastes good and you know it) by stopping at a fast food or fast causal joint. Should you eat from these places every day? Probably not. But there’s little harm in indulging once in a while. As long as you aren’t going overboard and eating a sack of cheeseburgers when you do, you’ll be just fine. So, if you think that you’re not missing out by avoiding these places, you’re wrong and you’re probably a snob.
Food