"I believe that the only true religion consists of having a good heart." 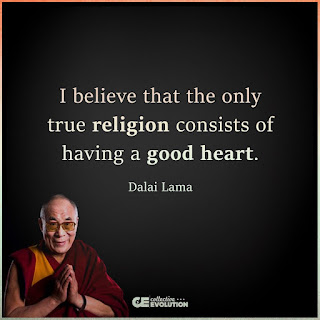 Yesterday, I saw this picture posted by a page I follow on Facebook called Collective Evolution. I immediately shared it because I truly believe in the quote from His Holiness the 14th Dalai Lama. I'm not a practicing Buddhist but ever since I was a young teen, something about the religion/philosophy has rung true with me. I have dabbled in meditation and have done research about the different sects but have never immersed myself into it for some reason. I think that ends today.

Shortly after I shared the post, my mother commented with "An odd choice for a Catholic to post. What does your Bible say?" I gave that question a thought, but only for a second. I quickly responded with "I believe Jesus would say the exact same thing." I wholeheartedly believe what I said to be true but as a semi-practicing Catholic at best, I don't know what my bible would say about that. Ever since I woke up this morning, I can't stop thinking about that exchange. Some background:

I was raised Catholic; well, baptized Catholic and raised by two followers of the Catholic Church. I don't have many memories of attending church as a child, other than when visiting with my grandparents in Florida. My grandfather often did readings at Mass when I was in attendance but I never truly understood why I was there. Fast forward a decade or so to the day I met my now wife, Christine. Her family are devout Catholics so they attend church weekly and sometimes more than that during Holy Week and the other important dates on the calendar. Somewhere along the line, we started having dinner with her parents on Saturday nights each week, either before or after attending Mass with them. I learned a great deal from Reverend Francis Alex Osei-Nyarko, the man who married Christine and me. His homilies would have me on the edge of my seat because I felt like I was truly learning something every time he spoke. Listening to him speak was what I always imagined college was supposed to be like before I went there, only to realize that it's just a continuation of high school (at least with the teachers I had). Of course when he wasn't at Mass, I'd often find myself bored and sometimes on the verge of falling asleep. I can vividly remember day dreaming when some of the other clergy were doing their homilies. The years went by, Christine and I did the Pre-Cana classes, got married, continued going to church, moved, had two children, had them both baptized, and now we have another child on the way. We'll get him baptized because his siblings have been and since it's expected by our families. Also it can't hurt if, in the end, Christianity is the only true religion. A religious insurance policy as it were.

So now we're back to the present day and I don't know that much about any religion really. I know more about Catholicism and Christianity because of the time spent in the church over the years but something about it never really clicked with me. I think the over arching message throughout the different sects of Christianity about being a good person is the key to it all. I just don't buy into the restrictions, expectations, and some of the opinions many in the church have. I cannot support and do not believe in a religion that has hate for specific groups of people. I also don't think physically going to church is necessary. Nor do I believe that people should being using their religious beliefs to write laws that discriminate against specific groups of people. How do any of those things make you a better person? What do you think Jesus would say if he were here now?

I don't want to discount what Christianity has done for the world but like all other religions, it has its problems. I think having a good heart is more important than following any scripture, any words on a page, any spoken word. Being a good person, not harming others, and giving back to the community are values that we should all live by. I don't see why it needs to be more complicated than that. Do I believe in a higher power? Absolutely. I also don't think that we when die and the lights are out, we're gone forever. Something happens, what I don't know. Maybe it's ascension into heaven. Maybe it's reincarnation. Maybe our spirit gets mixed up with others and recycled in some way. Nobody...NOBODY...can say otherwise. We can believe otherwise. We can have faith that something will happen. That God works in mysterious ways. But we don't really know until it's "over". If you have a good heart but didn't practice a religion that believes in heaven, I have a hard time believing God would turn you away.

So does this mean that I'm now going to become a Buddhist? Maybe. I won't know until I learn more. There are various sects that believe various things, just as in Christianity or any other religion, so it's hard to tell if any of them will click with me. I just have a feeling inside that pulls me in that direction and has for a very long time. It's a feeling that I can no longer ignore. Part of the reason this blog was created in the first place was for the new me to have a place to talk about things like this. It helps me put things in perspective and it is extremely cathartic for me to share in this way. So with that, I'm going to move forward trying to have a good heart because that's the only thing that truly matters.