Preparing for Unpub - Some tips & a checklist

March 08, 2017
The following was pulled from the blog on my now defunct publishing company's website. After Unpub 6 last year, I did a long recap post followed by some tips for those who haven't been and a checklist of things I HAVE to have when I go this year. As it stands, we're only 10 days away from the first day of Unpub 7 and I'm chomping at the bit to get there for a variety of reasons. My primary reason is to show of my designs but playing games for two and half days while seeing and meeting all sorts of cool people is the real reason. I hope you find the following to be helpful and if I can stress just one thing you read of this post more than any, it's the first point. Enjoy.

1) GO TALK TO PEOPLE - This is one of the most important things I took from the weekend. It might be because of my personality but if you have it in you to go up and talk to people you don't really know, you'll be much better off.

2) Have short games/options - I noticed a lot of people with 60+ minutes games sitting around a lot because many of the people attending said they wanted to play as much as possible while they were there. Thankfully for me, both of my games played pretty quickly, under 30 minutes. Also, I could set both up and just slide one aside once people declared what they wanted to play. There was one thing I was able to do with Tricks for Treats, because of the type of game it is, that most games probably can't. I was able to just play a hand or two of the game because the gameplay doesn't change from round to round. This allowed me to show people the game, get an impression from them and then either play more or let them move on to another table. You'd think I wouldn't be able to get a lot of good notes from that limited gameplay but I really think that I did.

3) Never assume - Remember how I said I thought most people knew what a trick taking game was? Yeah, a lot of people don't. Just because the mechanics you're using are popular or you've played a lot of games with them growing up doesn't mean everyone has. Assume the people who sit down have never played any game in their entire lives. Work the explanation of a mechanic into the rules.

4) Make it pretty - Try and make your prototype as pretty as possible. I'm not saying you have to have it review copy ready but as much as your friends don't mind marker on index cards, the general public does. I had cards printed through Drive Thru Cards for Tricks for Treats and Jeremy put together some nice looking tiles for Stop The Germs! It definitely made a difference.

5) Have stuff to give away - As I mentioned, I had candy and hand sanitizing wipes for anyone to take. I don't know how many people stopped because of those things but a lot of smiles and a few comments were made about them so I think that worked. Another thing I gave away was my 1 card game To The Edge. I gave one to every playtester and mostly everyone I talked to all weekend. It's nothing special but it was seemingly appreciated by all. I had business cards but giving out the game worked better I thought.

6) Be recognizable - I quickly realized that many people probably don't know what I look like because my picture on social media is the company logo. So I stuck one of my business cards in my badge holder and left that side facing out at all times. It really helped people realize who I was. I heard a lot of "Oh, I know that symbol" when I introduced myself. My suggestion here would be to do something similar or make your profile picture a picture of you.

7) Keep your talking to a minimum - If you're going to be teaching all day, you are going to lose your voice if you're not used to doing that. It's loud in there so you're straining your voice by talking louder as well. Make sure you can convey everything you can with the least amount of words needed and then sit back and say nothing unless there's a question.

8) Eat full meals - Find time to eat full meals when you can. My strategy of snacking throughout the day worked but it would have been nice to enjoy some local fare. That being said, pack some snacks to have with you because your food budget will get blown out of the water if you eat out for every meal.

9) Schedule playtests with "friends" - If there's something you know you want to play, try and schedule a time during open gaming hours if possible so you don't miss out. I noticed very quickly on Friday that people were ready to play almost immediately after the breakfast, likely because they had talked about it before hand.

10) Change your Twitter name - If you're on Twitter...you should be if not already...edit your name to include Unpub & your table number. I don't know how helpful it is but it certainly can't hurt.

Here is a checklist of things I think you should have if you go to Unpub in the future:
1) Prototypes
2) Giveaways
3) Sell Sheets/Signs
4) Business Cards
5) Water Bottle
6) Throat lozenges/hard candy
7) Snacks
8) Hand Sanitizer
9) Note pad and Pen
10) Cell phone/camera
11) Cordless charger/extra battery

If you're looking for me, I'll be at table D6 during the Sat PM/Sun AM slots, 3pm to 7pm and 10am to 2pm respectively. The map below should help. Oh and if you want FREE pie, come play Easy As Pie to get a mini pie of your choice. 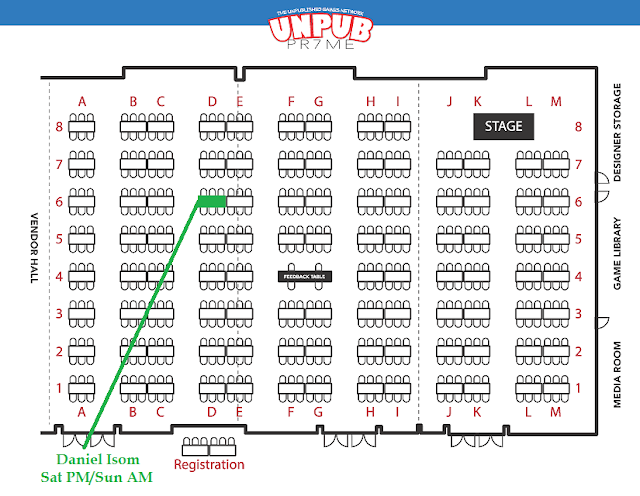