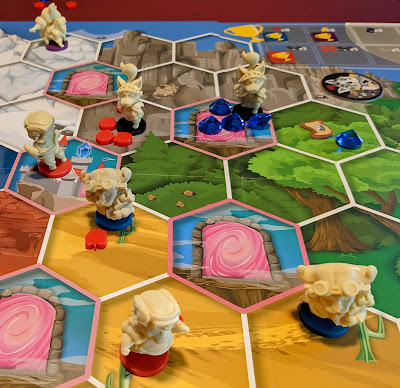 I don't have a lot of unplayed games left in my collection and technically My Little Scythe is in the kids' collection. It's the kids version of the Scythe, a game I've written about here previously. Wanting to bring something new to the group that they might actually enjoy, I figured it was time to take this out of the shrink wrap so I can learn it now that Grace is at the minimum suggested age to play. It's more complex than many mass market kids games you'll find on shelves at stores like Walmart or Target. The game has an origin story that is really cute. The long and short of it is that a father made made a My Little Pony version of Scythe so his then 6 year old daughter could play with him. You can read an interview that goes into more detail here.

In this more accessible and adorable version of Scythe, players race to be the first to claim 4 trophies from 8 possible categories. On each player's turn, they will choose one of three actions: move, seek, or make. These actions allow the players to increase their friendship and pies, power up their actions, complete quests, learn magic spells, deliver gems and apples to Castle Everfree, and perhaps even engage in a pie fight. There's dice rolling, pick up and deliver, and area majority, among the mechanics in the game. There's more luck and opportunities to be nice to other players compared to the original game. Helping other players is encouraged as it helps increase a player's friendship level, which is one of the eight possible trophies to claim.

I'm still a little salty about losing via tie breaker during our game because we all forgot about a rule that I didn't remember until it was too late. It would have changed Christine's incredible turn a few rounds before the game ended. That being said, I would gladly play this any time someone offered. It sort of scratches the same itch for me that Scythe does and it certainly plays much faster, but I would prefer to play the original if I have the time. However, I think this is going to make a perfect introductory game for my kids to learn a combo of game mechanics that you don't find in most games. It's cute, has a lot of things I like, and would be a great game to play when I'm not looking for anything too complex.