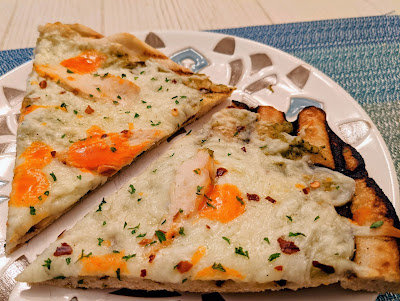 Pizza is definitely one of my favorite foods and probably one of the things I've made the most. I went from cooking it on a pan to cooking it directly on a stone. I make my own dough and often make my own sauce as well. I've written about pizza a few different times on this site because it's one of the few perfect foods. This recipe was one of the ones that encouraged me to buy the book. I followed the recipe exactly the first time around and it was pretty good, but I didn't love my pictures and wanted to try the actual grilling process again. It certainly takes some practice when using dough on grill grates. For my second attempt, I was making pizza only for myself because Christine didn't love the crust the first time around.

Unlike traditional pizza cooking, the sauce and toppings get added after the crust gets cooked on one side before being flipped over off of the direct heat. Working with an oiled dough, you stretch it out to a circle or oval, carefully drop one edge down on the grill grates, and then gently drape the rest of the dough out. After a minute or so, grill marks will appear and the dough will puff up a bit. This is when you flip the dough away from the direct heat, top with sauce and toppings, and then move back over direct heat. Since I had a bunch of the broccoli confit (Brocolli Cooked Forever) leftover, I used that as the sauce. I then topped it with mozzarella, grilled buffalo chicken, hot sauce, red pepper flakes, and parsley. Because I was using mozzarella instead of Parmigiano-Reggiano and fontina, the cooking time took more time in order to properly melt the cheese.

I LOVED this combination of flavors. As I said in my previous post, I want to slather the broccoli confit on everything. Making that a sauce was a home run and something I want to do many, many more times in the future. I think combining that with a garlic pizza would be nothing short of magical. Grilled buffalo chicken and hot sauce brought some extra texture and spice that went well with the broccoli. But ultimately this recipe is about grilling that dough. I liked it because you get that grilled flavor, but it would probably be even better if I was cooking over coals or wood. The texture is a bit crunchier than when cooked in an oven because of the direct heat. I prefer the traditional route, but I would do it this way in the future as a change of pace for sure.