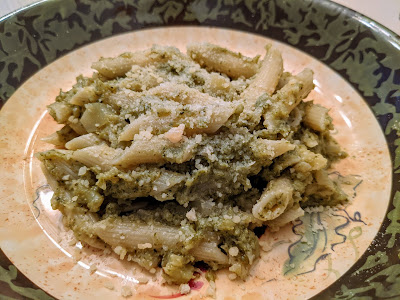 I've been very excited to make this recipe since my initial read through of the book. Broccoli is definitely my go to vegetable used to round out a meal. Normally I'll mostly steam some and then roast it the rest of the way with olive oil, salt, pepper, and whatever spices or spice blend sounds good in the moment, depending on the dish. Cooking two bunches of it in oil for two hours with some garlic, peppers, and anchovies sounded like an absolute winner. Over cooked broccoli doesn't taste great, but pushing it past that in fat makes a magical substance that I want to put on everything.

It's pretty easy to make and only takes a few ingredients, it just takes some planning if you want to eat it that day. It's probably not something you'll want to make for a weeknight dinner, unless you eat rather late. Florets from two bunches of broccoli get removed from the stems and then the stems are peeled and cut into thick slices. All of that gets blanched in boiling water for 5 minutes and then drained. Thinly sliced garlic and oil warm up over medium heat until the garlic just starts to sizzle. Peppers (I used red pepper flakes) and anchovies (I used paste) cook until the anchovies melt. All of the broccoli gets added and stirred into the oil. Cover the pan, drop the temperature to very low, and then cook for two hours. All you have to do is turn the broccoli a few times during cooking, but don't break it up much.

What you end up with is essentially broccoli butter. You are really making broccoli confit and I absolutely love it. The stems melt and the florets hold all of the oil's rich flavor. I would suggest using a good quality olive oil for this recipe. I used my regular, relatively inexpensive olive oil and while it's great, I think it could be even better. It makes quite a bit, so I used it twice this week. First, I put it on some penne rigate pasta (pictured above) and it was so good that Christine had seconds. It did need more salt, but I didn't want to over salt it in the first place. Then I slathered it on some pizza dough and topped that with cheese and omg was it amazing (see the next post for a picture).