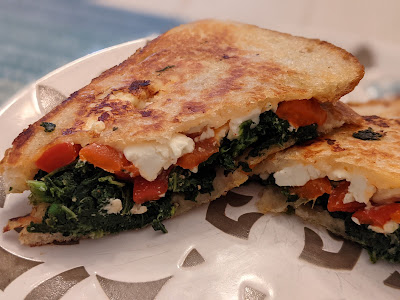 Did you read my previous post about Kale Salad? If you did, you'll remember that I wasn't all that impressed with the kale part of it, but did enjoy some of the other bits. Having a boatload of kale left in the bag meant I could knock out this sandwich that I really wasn't looking forward to. It consists of kale, pickled peppers, and feta cheese. I like feta and pickled peppers are fine, but I never have either on any sandwiches I make or order. For the bread, I picked up a crusty sourdough loaf because I figured these looser ingredients would need a sturdier vessel to keep them together. Aside from pickling the peppers yourself, the kale has to be blanched and wrung out until almost no moisture is left. Then you assemble and press them in a panini make or pan fry them with a heavy pan to press them down with.
I mentioned in my last post that I think kale needs to be cooked, so the fact that it gets blanched here gave me some hope. However, a mouthful of green between bread didn't sound appealing. Boy was I wrong. This has been the surprise of the cookbook so far. I don't know what it is about this combination of ingredients held together by buttery bread, but it was so good. The peppers brought a crisp vinegar bite, the feta made it a little creamy and salty, and the kale was soft and gave the whole thing some heartiness. I had made a grilled cheese with the same sourdough for Christine and we ended up splitting them because she enjoyed the kale panini just as much as I did. I wished that I still had kale left over to make another one. I could see myself making this again in the future, since it reminded me of some Greek influenced dishes that I've had previously.
books cookbook Food Resolution