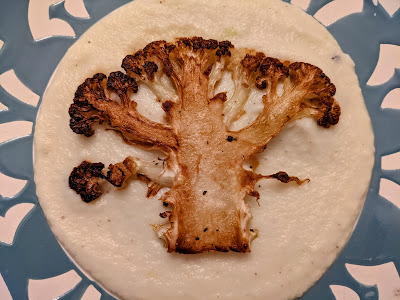 I'm not sure why there are so many cauliflower recipes in this book, but I'm having fun using the ingredient in different ways other than just roasting it as a side. This recipe does a really smart thing in using the whole head in two different ways for one cohesive dish. First, you slice two one inch thick "steaks" from the center of the cauliflower. Then you cut up the remaining portions and eventually turn them into a puree to go under the steaks. The steaks get pan fried with some oil, salt, and pepper until browned and softened a bit.
I enjoyed this recipe quite a bit, but felt like the puree could have used a bit of fat to liven it up. It reminded me of a thicker version of the cauliflower soup from this same cookbook. The steaks were similar to roasted cauliflower, so they were quite enjoyable. It's really hard to beat roasted vegetables with oil, salt, and pepper. All of that browning on the outside gives it a lot of great flavor. I served this with Kale Salad for a fully vegetarian meal. Check out my next post as I recap the meal as a whole.
books cookbook Food Resolution