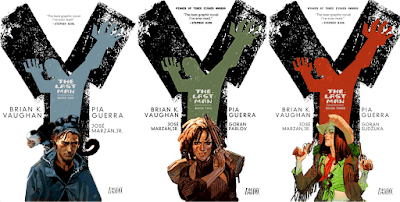 At the end of 2020, I started reading again to prime myself for a goal to read 12 books in 2021. Part of that reading was the 10 part graphic novel series Y: The Last Man. It's a apocalyptic/dystopian thriller where one man, Yorick Brown, and his monkey, Apersand, are the only two males still alive. Anything else with a Y-chromosome dies almost instantly our of nowhere. There are many theories one what caused the near extinction of men, but that's really not what the story is about. Yorick wants to find his girlfriend, Beth, who is on the other side of the world in Australia. The books are centered around his journey to track her down and the people he encounters along the way.
I'm a huge fan of anything dealing with an apocalypse or some sort of near world ending event, so this seemed right up my alley. For the most part, it was quite enjoyable. There's plenty of humor and action, with the occasional mature scenes expected in the situation the world found itself. However, without giving away too much of the plot, there were just parts of it that bored the hell out of me. There are two separate storylines about groups of women who seemed hell bent on killing any men left that really took away from the story. Had they incorporated them together or just dropped one, it would have been much better.
Another bothersome piece was how the story ended. It's not a bad ending per se, it just felt really rushed like a show that isn't going to get picked up for another season. They have to try and wrap everything up without being able to flesh out the story. I get that a story needs to end sometime and thst nailing the perfect ending is nearly impossible in any form of media. I just wished they didn't go overboard trying to tie the bow as they wrapped it up.
Aside from those couple of things, I thought it was a nice way of getting back into reading. The illustration and character interaction was enough to keep me wanting to read more. The mature setting here and there was tasteful; wasn't as graphic as I had imagined it would be given the circumstances. Sure there were some cheesy parts to the story, but those just added to the charm. I found myself rooting for Yorkick and his supporting characters, while also coming up with my own theories as to why all the men died. Trying to figure out the cause was always on my mind. It made me really pay attention to what was said and what was drawn. After reading this series, I'll definitely be on the lookout for other graphic novels this year.
books Review